I spent last weekend at the World Fantasy Convention in Baltimore and had a great time even though I spent a large chunk of it behind my table in a very slow moving dealer’s room–no worries, I went in expecting it to be more marketing-oriented thing than sales. Staying in one place made it a lot easier for people to find me and I had a lot of enjoyable conversations with artists, authors, and readers.

Not all that long ago, the World Fantasy Awards changed the award from “the big ugly head” to a bronze award created by Vincent Villafranca. Vincent is an amazing artist and, in addition to the 2013 Hugo Award he made, I am proud to own a few of his smaller works. This year, the art show featured several of Vincent’s works, including various prototypes and molds used in the process of creating the award. It was fascinating to see and I’m so glad they did this. Far too often, what goes on behind-the-scenes in the creative process is ignored, so I applaud that they made this possible for all to enjoy. (There was a lot to enjoy in this year’s art show.) 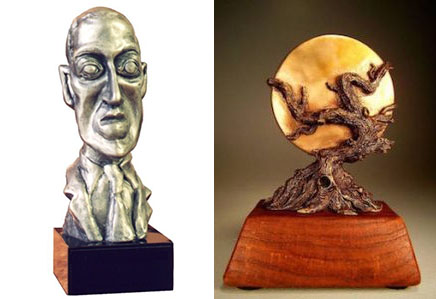 Despite changing the award, the nominee pins remained the same–a smaller version of the head. This year’s convention team took it on themselves to work with Vincent and create a matching nominee pin that was the envy of many previous nominees, myself included. I have to praise their efforts to make this happen. I wish I had taken picture of one. Maybe a nominee (or winners, congratulations, by the way) will post a shot of theirs soon.

This year’s convention was also the first I’ve seen to feature a consignment table–likely influenced by SFWA’s efforts at Worldcon earlier this year. This allowed attending authors to bring some of their books and have them available for sale at the con. From what I could see, it appeared to be quite successful and helped out a lot of authors who wouldn’t have been well-represented by the regular book dealers. I know World Fantasy has some weird rules about the dealer’s room that might have prevented it, but this table should have been inside with the rest of us. If other’s follow Baltimore’s lead–and they should–that’s the one improvement they can make.

Conventions are volunteer-run events and as such, there will always be little glitches and mistakes. I know there were a few, but ultimately, I didn’t care. This convention was better than many “professionally-operated” events I’ve attended and people seemed to be having a genuinely good time. That’s the bar I set and adding the extras I’ve mentioned causes me to rate this year’s con quite highly.  Congratulations and thank you to everyone that worked on it!

Best Science Fiction of the Year: Volume Four gets a hardcover