The day it nearly ended

Five years ago today,  I was struck by a “widowmaker” heart attack while attending  Readercon with my family. My symptoms were more in line with food poisoning or an allergic reaction, which seemed to be the likely culprit for the first three hours. After that, however, my wife called an ambulance. When the paramedics arrived, they took one look at me and made the call. In minutes, we were off in the ambulance to Lahey Clinic, just one block down the road. I can only remember bits and pieces of the trip, the ER, and operating room.

It’s hard to gauge time when you are constantly falling asleep (exhaustion) in a room with no windows. Sometime later, the doctor visited me and explained what had happened. Two total blockages–reopened with stents–in the left anterior descending (LAD) artery, a very critical location. I was very lucky to have survived, but the full extent of the damage would be revealed over the next few months. When blood flow to a section of the heart is cut off, every minute counts. Muscle dies. [Later it was determined that I had suffered significant scarring–what happens when the muscle dies. My ejection fraction (EF)–a measurement of the percentage of blood leaving your heart each time it contracts–was 26. Normal is 55. This made me a candidate for a defibrillator, which was implanted nearly six months after the heart attack.]

As the doctor left, he turned out the lights so I could get some more sleep. At that moment, the gravity of what had happened hit me. I nearly lost everyone I cared about. Tears came easily before I once again fell asleep. [Sleep never lasts long in a place like this. Frequent blood tests, the tangle of tubes and wires, the blood pressure cuff going off every thirty minutes, the strange noises and smells from nearby rooms…]

When I woke, the nurses encouraged me to sit up. After a heart attack, you have a fluid build-up in your lungs and I could feel it. I had to breathe into a device to measure my lung capacity. I can’t remember the number, but it was low. I asked what “normal” was and discovered just how bad I was. When Lisa and the boys would visit, I’d use this device to demonstrate the daily progress I was making.

The doctors and nurses saved my life and I will be forever indebted to them, but the best medicine came from my family. Their visits were the highlights of my days there. The boys were only nine and twelve at the time, so I was worried about the effect this would have on them. Their visits gave me the opportunity to feel like I was actively doing something about that, but honestly, I think they had more of an impact on me. We were hundreds of miles from home, but I had everything that mattered with me.

Word of my adventures quickly spread at Readercon. In addition to updates from Lisa, Sean and Kate, who were also attending Readercon, let me know what the response there had been. The stories of what people had done for me were very uplifting. That response from the science fiction community carried on past Readercon, through my recovery, and still continues to a lesser degree today. I’m never going to forget that. You have a lot of time to think in the hospital and a brush with death changes your priorities and redefines what is most important to you. The process started there and continued as I recovered back at home–and at my second stay in the hospital a week later. Friends who had been through similar life-changing events started reaching out to me to talk and it helped a lot. [There’s an understanding that comes with going through this that is hard to explain to people who haven’t.]

Weeks later, when my then employer decided to fire me–a story that ends well for me but can’t be spoken about–I gave a lot of thought to my decades-long career in education. It was a career I loved and did very well in, but the field, particularly the administrators, was making it impossible to make a positive contribution to education. I took a job with friends that took me from the top of the department to the bottom. No more supervising. No more overtime. The goals were simple: keep stress low, pay the bills, and put more time towards my new career in editing. I’ve only recently quit that job. Not quite earning a living from this, but I’m moving in the right direction and doing something I love.

During those first months post-heart attack and while all that job stuff was happening, I was in cardiac rehab three times a week. That’s basically nurse-supervised exercise and nutrition counseling that teaches you how far you can push yourself now and what you need to do to stay healthy moving forward. I also considered it group therapy. Put a bunch of cardiac survivors in a room and they will inevitably compare notes and share details. Those informal chats with bike or treadmill neighbors helped me gain a lot of perspective. I wasn’t crazy. We were all thinking the same thing. It also taught me that I was one of the lucky ones, unlike many of the others, my heart attack wasn’t my fault. It wasn’t diet or genetics or anything I could have known about in advance. It’s hard to feel guilty about your situation when what happens it compared to being struck by lightning. [I developed spontaneous blockages. It’s very rare and they don’t know why they happen. It’s not the sort of thing known to happen more than once to someone.] I just had bad luck, followed by extremely good luck.

My mantra for the last five years has been “life’s too short.” It’s allowed me to let go of a lot of baggage and I’m happier for it. Things still bug me, but not nearly as often. I can laugh at some of those now. Overall, I’d say my quality of life is better for it.

What’s meant the most to me though is the five years with my family. Lisa and the boys, what can I say… I’m the luckiest husband in the world and incredibly proud of my boys, now young men in high school. I’ve had the opportunity to see my sister get married to a great guy and become a mom (twice). I’ve had more time with my parents and brother, including a trip to Ireland with Dad to visit extended family I haven’t seen in years. And then there’s all sorts of little adventures with my adopted brother and sister, Sean and Kate. 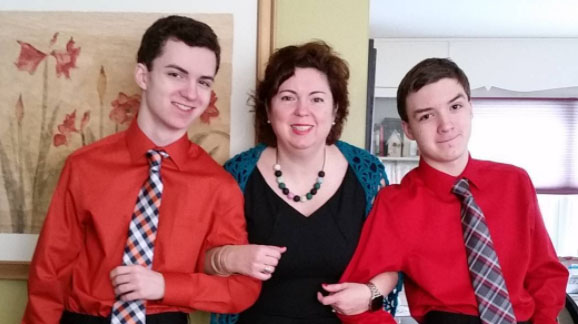 Yeah, so I celebrate what was a horrible event, but it put me on the path I’m on today and I have every reason to be happy about that.

And there are bad days too…