Who says you can’t get your ebooks signed?

I tried an experiment at World Fantasy Con last weekend…. 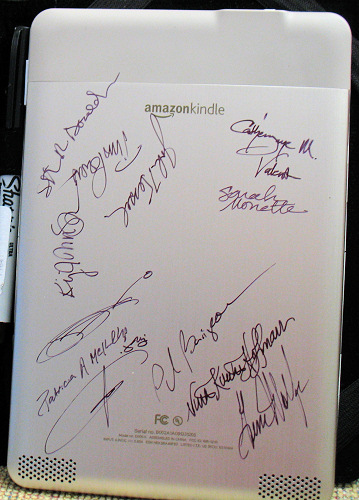 All you need to get an ebook signed is a Sharpie. I will continue doing this until there is no room left on the back. By then, it will probably be time for an upgrade.

I’ve been doing a lot of last minute con-going lately. This past weekend was a quick trip down to Philcon. I had a lot of work to catch up on, so I skipped Friday and drove down on Saturday. No traffic, but the hotel’s directions put me blocks away from where I should be. Fortunately, I had a second set of directions from MapQuest and still made it there in a little over 2 hours.

While registering, I ran into E. Sedia (squirrel_monkey) and Paul Abbamondi (pabba). We’d exchanged email, but never met and recognized one another from photos or name tags. A moment later, Joshua Palmatier (jpsorrow) popped in, which was convenient, since I had to find him to get my room key. Things were off to a good start.

I had never been to Philcon before and I’ve been told it’s a con on the decline. I’ll have to admit to not recognizing the names of a good number of the guests, but I still had a good time and it was well-worth the trip. The worst part of the con was the elevators. One would apparently eat people (door sensors not working), others would skip floors, and you could end up waiting 10 minutes for a ride. The big plus was the cost of the hotel, which worked out to about $100 a night after taxes and such. I can live with bad elevators if that’s the price to pay for an affordable con hotel. (Hey Boskone, are you listening?)

The dealer’s room had a good assortment of stuff, better than most of the recent cons I’ve attended. Not being a dealer this time, I had more social time and even attended a few panels. The readings and signings were tossed together at the last minute, so they were poorly attended. It was also a trick finding them. I stopped by Joshua’s reading, which turned into a conversation between Joshua, Barbara Campbell, and I.

Outside the dealer’s room, I ran into Gary Frank, Doug Cohen (slushmaster), Jenny Rappaport, Chris Cevasco (Paradox Magazine), and a few other people. (Sorry, I’m blanking.) Talked to Doug for a while about magazines and Chris told me to keep an eye out for a new issue of Paradox. That’s always good to hear.

The first panel I dropped in on was about websites for authors. Given that I do a lot of web design in my other life, I thought this could be interesting. All I have to say here is that it was a good thing John Scalzi was on this panel. He was the main voice of reason when odd assertions about what should and shouldn’t be done were made. By the way, if you haven’t been reading his blog, you need to check it out sometime. Yes, even discussions about toast can be made appropriate for a writer’s site.

The next panel was about mistakes writers made. Peter Heck did an excellent job of moderating and focused the discussion around Heinlein’s five rules. Everyone on the panel had some useful insight and personal stories. I’m not an author myself, but I did find it amusing, particularly when they spoke about reading the guidelines and not pissing off the editor. I just kept having flashes back to Nick’s journal posts about editing at Clarkesworld.

To my surprise, I stumbled upon a last minute signing by Charles Stross (autopope). We had some time before dinner, so I dragged some books down from the room and he was nice enough to sign a stack for me. If you’re looking for signed first editions of The Jennifer Morgue or Glasshouse, I have them. 🙂 I wish I’d had more time to talk with him.

On the way back to my room, I ran into John Scalzi. We were supposed to meet up later that evening so he could sign some copies of The Android’s Dream for me. He had a few minutes, so we went back up to the room, chatted and took care of some books. There was some talk of ninja children (our own), books, and such before we headed our separate ways for dinner.

Dinner with Barbara and Joshua was fun. We found a nice place, secured a quiet table in a corner of the back room, and relaxed. Conversation from earlier in the day continued to spin off into more concrete ideas for a con panel based on the stories written by authors when they were 9-12 years old. We thought it would be fun to see some of these pop up at group reading or online somewhere. And then there was the fish stick incident, but I’ll let Joshua or Barbara explain themselves… Oh and any rumors about the next trilogy from Joshua being a prequel featuring a magic stool, are just that, pure rumor.

Back at the room, Joshua signed copies of The Cracked Throne and The Skewed Throne for me. I also picked up the prizes for our Cracked Throne contest winners, so those will go out shortly.

The SFWA party was apparently the place to be on Saturday night. I spent most of the evening there. John Scalzi was quite entertaining, especially when a young author stumbled into our section of the room. He was caught completely off guard when John asked who he looked like: Ashton Kutcher or Nathan Fillion. A few people (myself included) didn’t recognize the second name, but when it was explained that he played Mal on Firefly, the lights came on. He was a dead-ringer for a younger version of that actor. After the initial shock wore off, he joined us and was soon followed by his agents. All an all, a lot of interesting discussions ranging from what the robot on John’s shirt was about to do to that giant orange (you don’t want to know) to distressed furniture (a sales pitch for Joshua).

I wanted to get back home to my wife and kids, so Sunday was a short day for me. I dropped in on a panel about generating interest in the genre in young people and then headed home. I didn’t hear any new ideas, but an observation did stick with me. These three genre books are geared towards young adults:

What do they have in common? They aren’t typical genre covers. In fact, they are more likely to be seen in teen magazines. Someone in marketing knew what they were doing. I certainly wouldn’t have thought of doing that. How about you?

All the signed copies of Lies of Locke Lamora are sold and finally shipped. Fortunately, Scott has been kind enough to agree to sign a second batch. For the first batch, he put printed a chapter from the next book, signed it, and placed it inside the dustjacket. He won’t be doing that with these, but he says he has something interesting planned. By the way, even without all the fun stuff he’s doing to our copies, Lies is a very good book.

Kushiel’s Scion and Fistful of Charms have been out for a few weeks, but since these copies ere being signed, they’ve just started shipping last week. Phantom was supposed to be issued signed by the publisher, but (probably due to Terry’s health) that edition was cancelled. I had a lot of disappointed customers on that one.

The free fiction on our site seems to be drawing a lot of attention in the first 24 hours. This is definitely something I plan to continue. Next up will be a couple of stories from Andromeda Spaceways Inflight Magazine.

Glad to have Talebones showing in the magazine list. Good news there is that the subscription drive has been a success and they will continue publishing. Fantasy Magazine slipped to #2 this week, but it stands a good chance to take back that spot next week.

Readercon was excellent. I did a lot of legwork before the con and arranged signings with several authors. This required me to abandoned my trusted wreck of a car and borrow my in-law’s van. We packed over 20 big boxes of books, luggage, two kids, CDs and my wife and I into the van and headed off Friday morning. 5 hours later we were at the hotel. Last year it was 6.5 hours, so we were quite pleased. After several trips between the van and room, it was off to registration.

END_OF_DOCUMENT_TOKEN_TO_BE_REPLACED

The combination of the 4th of July and Readercon significantly cut the number of shipping days down this week. Sales numbers are lower, but the placement of the first three books probably would have held on a full week.

Readercon was great and somewhat exhausting. I took over 20 boxes of books with me for the assorted signings I worked out in advance. I’m catching up on all the stuff that piled up while we were gone, so I’ll post more either late tonight or tomorrow.