And the house is finally gone

This week brought news worthy of another update on my brother’s house (the one that was destroyed by fire months ago).  The insurance companies paid, the permits were issued, and the house came down this week…. 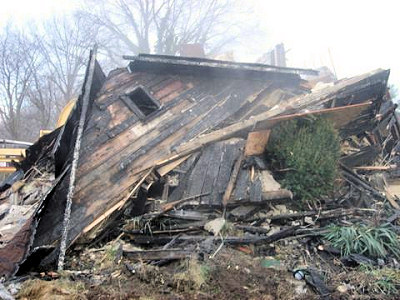 The blueprints are in the hands of the builders and they should break ground in the next week.  It’s going to be a beautiful house and the perfect home for my brother and his wife.

Final update on my brother

It’s over a week later and I think they’ve recovered all they can from the house. The insurance people have been incredible. It’s now likely that my brother will sell his lot to a contractor and buy a new house in the same town. They should be able to do this and replace nearly everything lost in the fire with the insurance money.

His fiancee’s workplace and my sister’s school (she’s a teacher) have been taking up collections to help cover the rest. A first grader offered everything she had (about $700) because my brother lost his dog and that made her very sad. The money wasn’t accepted, but this is just one example of the type of things that have been happening over the last week. It’s been incredibly uplifting.

Sorry I’ve been bad about replying to everyone’s comments on the last couple of entries about this. For the obvious reasons, spare time in the last week wasn’t what it should be. Thanks for all the kind words.

Oh and in answer to the standing question…. The hard drive that I salvaged from the melted Dell laptop was a Toshiba.

My optimism has paid off. My brother’s computer was a melted hunk of plastic, but I was able to chisel the hard drive out and recover all the data from it. All his photos. All the music he planned to use for the wedding. Everything!

Lightning struck and burned down my brother’s home yesterday. Fortunately, he was at a friend’s wedding at the time. There is a news story here and the people in the photo are my parents. What the article fails to say is that a propane tank on the front porch exploded moments after the house was struck. Pieces of the tank were found in a backyard across the street two houses down. My brother and his fiancee spend a lot of time on that porch. If they were home, it’s likely that they would have been there or in the room on the other side of the bay window that looks out onto the porch.

I was there most of yesterday evening and I have to say that despite not being able to save his house or his beloved dog Molly, the firemen were simply incredible. It’s been ruled natural causes and everything was explained to us in detail. Afterwards, I walked through the house with my brother and a firefighter friend of his. He’ll be able to save a handful of possessions. It’s heartbreaking. Molly was like his child and he put so much work into that house. There were many Martha Stewart jokes at his expense over the years.

He’s getting married in November. It would be amazing if they can get their home back before their wedding and if there is any way, I know family and friends will make it happen. Fortunately, we’ve heard excellent things about his insurance company, Allstate. We’ll know more later today.