The Shirley Jackson Award winners were announced yesterday during a ceremony at Readercon. Among the award-winning works was "The Things" by Peter Watts, which we published in the January 2010 issue of Clarkesworld Magazine. [text and audio] All of us at Clarkesworld are very happy for Peter and offer him our congratulations and the best of luck next month when we find out whether or not he wins a Hugo Award for the same story.

Here are some pictures of his award and the nominee stone: 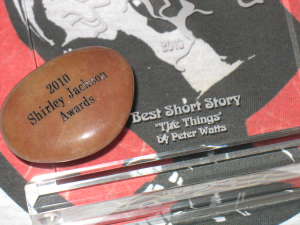 It’s not easy to photograph lucite.