THE PARTIES: Having a chance to sit and talk with new and old friends was so energizing that I ended up incredibly sleep-deprived by the end of con. Way too many people to name.

OUR PARTIES: We held two parties this year. Thursday night was an open party in the SFWA suite. (Did anyone get a picture of the cupcakes?) Saturday night I co-hosted a private party with Sheila Williams from Asimov’s. Someone kindly volunteered the Presidential Suite at the top of the hotel, which is a quite floor, so we billed it as an alternative to the overheated and loud parties held elsewhere that night.

THE CHESLEY AWARDS: I was honored to be asked to hand out the Chesley Award for Best Magazine cover, particularly since half of the nominees were from Clarkesworld. Ken Barthelmey won for this cover, but couldn’t be there: 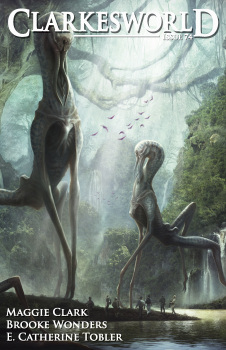 After the ceremony, I had a nice chat with Vincent Villafranca, the artist responsible for the amazing base on this year’s Hugo Award. I must own one of his bronze robots some day.

ART SHOW: Highlight for me was seeing so much of Julie Dillon’s work in-person. I’ve only seen prints of a few of her pieces, but there were several Clarkesworld covers on display and they were incredible. Small screens don’t do them justice. Now I must own some of these too. Sadly Julie had to cancel her Worldcon trip. Was looking forward to seeing her again.

JAMES PATRICK KELLY READING: The second story Jim read is in the current issue of Clarkesworld. Kate Baker joined him up-front to read the part of the wife and by the end, the two of them had the audience in tears.

THE ELEVATOR SHOUT-OUTS: It’s still somewhat surreal to be recognized at cons, but this time we had people yelling “Go Clarkesworld” from packed elevators that passed us as we headed down to the lobby. That happened three times. Never figured out which people were responsible for that one.

WHO’S STALKING WHO?: Kevin Ikenberry and I first met on my connecting flight from Houston. Our paths crossed so often that we became (jokingly) convinced that one of us was following the other. Funny way to make new friends.

PANELS: There were some misses in this category (moderation issues), but I enjoyed most of them. Was shocked to have a full kaffeeklatsch and had a great time chatting with the people who came. Signing was slow, but someone brought a cool little monster book to sign. Now I have to find one.

ROOMMATES: Sean and Jason were my roommates for the con, replicating our Reno Worldcon, but this time we were all nominees.

HUGO AWARDS: Despite being told by several people that we were favored to win, I wasn’t all that confident we would. Crazy things happen in the Hugos sometimes. Was overwhelmed when they announced that we were the winner and remember very little of what happened next. I know I was shaking and people told me I made them cry. I’m waiting for the video to get a better handle on this one. Sleep deprivation and adrenaline are an interesting mix. I ended up being up until 5AM carrying the award with me everywhere and making the rounds at the parties. The best part is that I won this award with my friends: 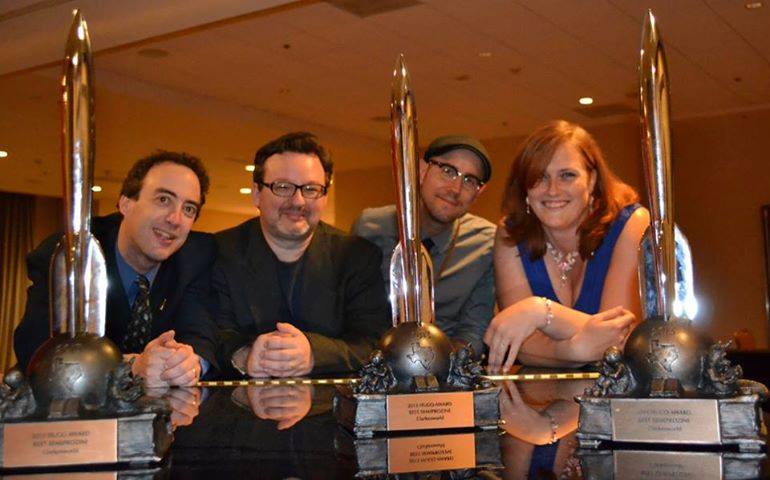 More on the Hugos later…

Pictures of the 2013 Hugo Award