Hugos, Nebulas and Clarkesworld: Looking back at 2008 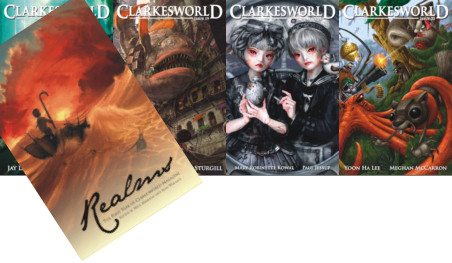 Clarkesworld Magazine is eligible for the Hugo in the semiprozine category. If you’ve been enjoying what we’ve been doing and are eligible to vote, please consider making us one of your choices. From what I’ve been told, this may very well be the last year for this category. That’s a shame.

In 2008, we released our first volume of Realms, introduced audio fiction (now available for free via iTunes) and saw some staffing changes. With Nick Mamatas leaving for Viz Media, Ekaterina Sedia joined us for a few months to help out with the non-fiction while we searched for a permanent replacement. I stepped in as the new fiction editor and brought with me a new submission system and team of four slush readers that helped bring our response times for authors down to an average of 30 hours.

One of our stories, Summer in Paris, Light from the Sky by Ken Scholes, has made this year’s preliminary Nebula ballot. It’s a great story and I hope this gets it some well-deserved exposure. It was published in November 2007, so it’s no longer eligible for the short story Hugo. These, however, are:

The Sky that Wraps the World Round, Past the Blue and Into the Black by Jay Lake (recently selected by Gardner Dozois for the next volume of Year’s Best Science Fiction)
Clockwork Chickadee by Mary Robinette Kowal (most recent winner of the Campbell Award for Best New Writer)
A Buyer’s Guide to Maps of Antartica by Catherynne M. Valente (recently selected for Rich Horton’s Unplugged anthology that features the best SF/F from the web)

Debris Ensuing from a Supervortex by Brian Ames
batch 39 and the deadman’s switch by Simon DeDeo
Teeth by Stephen Dedman
After Moreau by Jeffrey Ford
The Glory of the World by Sergey Gerasimov
The Completely Rechargeable Man by Karen Heuler
Gift of the Kites by Jim C. Hines
The Secret in the House of Smiles by Paul Jessup
Captain’s Lament by Stephen Graham Jones
Blue Ink by Yoon Ha Lee
The Human Moments by Alexander Lumans
Tetris Dooms Itself by Meghan McCarron
Passwords by John A. McDermott
The River Boy by Tim Pratt
Worm Within by Cat Rambo
A Woman’s Best Friend by Robert Reed
Idle Roomer by Mike Resnick and Lezli Robyn
When the Gentlemen Go By by Margaret Ronald
Flight by Jeremiah Sturgill
Birdwatcher by Garth Upshaw
Episode 72 by Don Webb
Can You See Me Now? by Eric M. Witchey

Someone at Albedo One has good taste in art