Sometime in March, the Clarkesworld Magazine submission system received its 100,000th story since being installed in September 2008. Since then, we’ve been open for submissions every month, except two. Back when I started developing this software, we were receiving about 300 submissions/month via email. (If I had to guess, somewhere between 4000 and 5000 of the earliest submissions to Clarkesworld are all that is missing from the database.) Since then, the monthly volume has increased to nearly four times that. (We were occasionally hitting 1200/month before we stopped accepting horror story submissions.)

It’s not the best way to count authors, but the system has submissions from just over 44,000 distinct email addresses and of those, 28,000 have only ever submitted one story. Three email addresses have broken 100 and a handful are approaching that milestone.

That’s a lot of people who have sent us their short fiction. Thank you and I look forward to reading the next 100,000! (Assuming they don’t all fall into the queue today.)

Over at Clarkesworld, our submission guidelines provide a list of stories that are very difficult for an author to sell us. The list has evolved over the years, but we haven’t had to add many in recent years. That said, we still receive a lot of submissions from authors that have either not read the guidelines or think their story will be the exception. (Stares directly at the authors submitting stories about zombies. You’re wrong.)

For years, we’ve received stories that have attempted to violate every one of those hard sell criteria. My own sons–under pseudonyms–have even written and submitted them. I can see how the combination might make for an interesting writing challenge, but I can’t imagine the finished product ever selling. I suspect the authors know this as well and are submitting them more out of the humor value than any hope of publication. Still, it seems I should be more up-front about that…

Among other things, my previous post commented about the rude, obnoxious, or even threatening responses I sometimes receive after sending rejection letters. Privately, someone pointed out that there’s a second tier of authors that choose to share their cranky thoughts via blogs, forums, and conventions. It’s not all that surprising. I’ve been hearing them for years thanks to Google alerts, Twitter search, and word-of-mouth.

These typically aren’t in the same class of rude as someone who emails an editor directly, though sometimes it can be. Being frustrated about rejections is natural and definitely not restricted to new authors. It becomes problematic when it turns to anger and hate, makes up outrageous claims, or wishes harm to someone. My favorite of the lesser claims is that “they don’t actually read submissions.” [This is typically a criticism of fast-response markets. Newsflash: Longer-response markets spend the same amount of time on your story. For all that extra time, the story is just sitting there in their pile.] The worst I’ve seen? Some mean-spirited things said about my heart attack, not long after it happened.

I’m not saying you should censor yourself, but you should pay attention to what you say and how you say it. I recall listening to a podcast where an author railed on and on about how we were killing science fiction. He even cited a specific story to back up his claim. Despite this, he continued to send us his work on a regular basis. Was that podcast ever held against him? No, absolutely not. He even managed to get a few of our top tier rejection letters, which would never go to someone I didn’t want to work with. You’re allowed to be critical of a market for publishing something you didn’t like. Although dramatic, he reasonably defended his position and never once stooped to the childish “they rejected my stories, but published this crap” or name-calling that I’ve seen from others. I can respect that.

When I worked at a high school I had to regularly remind students that the Internet is forever and nothing there is truly private. Friend’s-locked posts, email, and private forums don’t provide nearly as much protection as some authors obviously think. Maybe they don’t even care.

Do I track this stuff? Only the worst offenders, which might amount to a few each year. None of them have ever submitted a story good enough for this to have held against them. Their small numbers are why they went largely forgotten in this weekend’s post.

I originally started talking about this on Twitter, but as comments came in, I thought perhaps having a more permanent home for this would be a good idea. The tweet that started it all was:

Another day, another profanity-laced email (with veiled threat) in response to a rejection letter. Filed for future reference. #EditingLife

Here’s the thing about short story submissions at Clarkesworld, we see so many–nearly 1200/month–that it is unlikely we’ll remember one we didn’t like. Each story gets considered on its own merits, regardless of how good or bad the previous one was. It doesn’t matter if you are an established pro or a newcomer, all stories are considered equally. This is even the case on those rare occasions that we ask an author to send us a story. I know some markets solicit stories–meaning they promise to buy an invited submission–but we don’t.

If you happen to send a rude/obnoxious response to a rejection letter, we’ll keep it on file. I receive anywhere from one to four of those each month. (There’s one author who has sent me over two hundred.) In eleven years, I’ve only received one apology, and that was from a professional author–yes, they can cross the line too.

Before I send out an acceptance letter to someone I haven’t worked with before, I’ll do a quick search through my email history. None of the authors who’ve sent me those emails have ever made it that far, but should they, I’d have to seriously reconsider working with them. Why would I want to work with someone who is disrespectful and likely difficult? It’s no different than sending rude and obnoxious emails to a potential employer before your interview.

Do editor’s talk to one another about this stuff? Sure, it happens. Misery loves company and together we can laugh about it. However, it is highly unusual for names to be shared. The only cases I’m aware of involved authors who could be considered a serious danger to others. Authorities were involved and fortunately nothing further happened, but those actions led to the author’s name being known to a few editors.

In that Twitter conversation, one person asked if I ever go back and read an author’s older submissions before sending an acceptance. Admittedly, I’ll do that on occasion, but more to see if I missed something in earlier story. More often than not, what I’ll find is a visible evolution in the author’s work or a spiraling in on what we like, which is pretty cool. As I said at the start, each story gets considered on its own merits, regardless of how good or bad the previous one was. So long as you haven’t been an ass in your prior dealings with us, we’re good. Oh and that author who apologized, we’re good too.

[A follow-up that addresses author rejection comments made on blogs, forums, etc. is here.]

Been having too much fun with Wordle lately, so why stop. Here’s a look at the August submissions for Clarkesworld after you take out the US, UK, Canada, and Australia (because with them you can’t see anyone else). 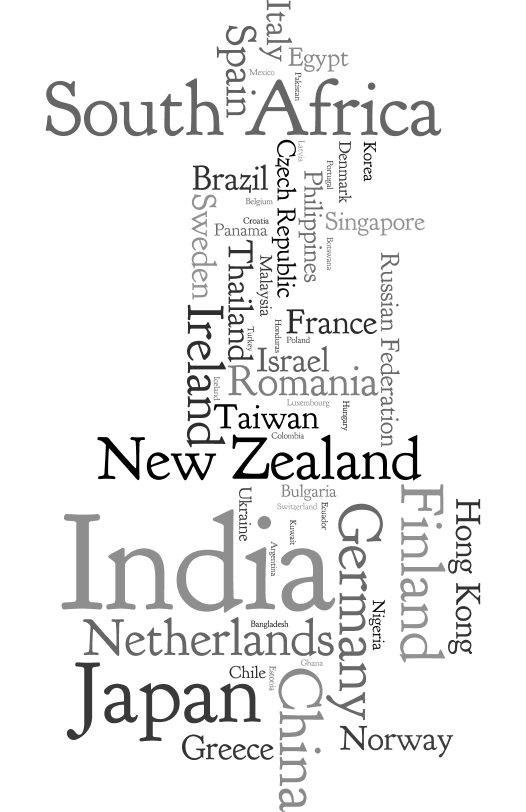 We haven’t played slush pile BINGO, but I did make the board after looking over some of the stories we’ve rejected at Clarkesworld. (For this.) I don’t think the center square will be a big surprise to anyone.

If you’d like to suggest alternate BINGO squares, just put them in the comments. 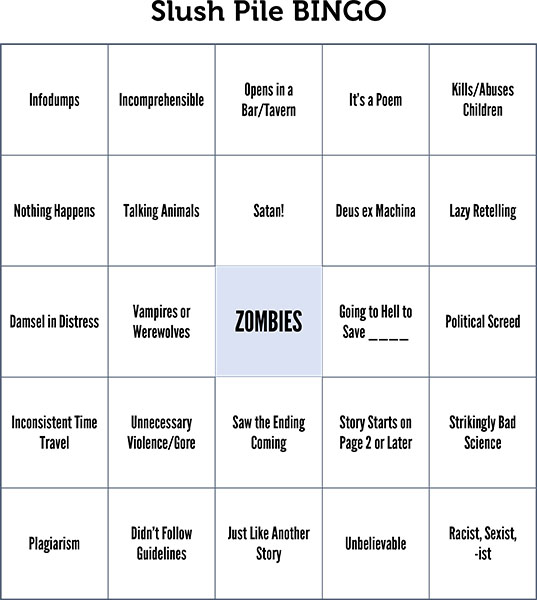 Update 8/24/17: Sigh. Yes, there are some good stories that check one or more of these boxes. However, the more you check, the less likely I am to agree that they are. We have published a story that opened in a bar, even though that’s on the board. Sometimes you can take something common and make it your own. Most don’t, so it gets a square.

IMPORTANT: Not all of these items are weighted equally. In a true BINGO board, some “unrecoverable” squares (plagiarism, zombies, etc.) would fill entire rows.