I spent last Thursday through Monday morning in Tacoma Washington at the Cascade Writers Workshop. This was my first time participating in a critique group (the sessions were run Milford-style), so I had been building a slow panic in the days and weeks leading up to it.

I printed and read through all the stories prior to leaving and decided to use my 5 1/2 hour flight to Seattle for writing out my notes. What I did not count on was turbulence and a four-year-old that screamed in the row behind me for four of those hours. (In the last thirty minutes, her sister joined her for a brain-scrambling serenade.) I finished that pass on the plane, but the notes were a mess of scribbles.

I was picked up at the airport (Kelli: I will continue to insist that it wasn’t hot there) and off we went to the La Quinta Inn in Tacoma where we were joined a some Cascade staff for dinner. I spent some time chatting with people but soon retreated back to my room to make some more legible notes on the stories in preparation for the next morning.

Unlike conventions, workshops start early. I’m very glad that I was still on East Coast time because 8:30/9:00 is not what I consider my peak operating conditions. Being a night owl helps on the other side of this time difference. Staying up late was not a problem, but the hotel bar closed insanely early (another way it’s not like a con).

There were seven authors in my group and there was a good variety in the stories. There was a mix of fantasy and science fiction, a novella, and two chapters of a novel. Despite the size of the group, this was the part that intimidated me most. Fortunately, group leader goes last. One-by-one they took turns explaining what worked and didn’t (slowly checking things off my list) before it would finally get around to me. I think I was somewhat reassured by the overlapping opinions and didn’t freeze up or pass out as I imagined in my nightmare scenario. I said my bit, the author would then get their turn and we’d discuss things for a bit. We were a bit slower than the other groups, but I liked the dynamic and we got everything done (with a ten minute extension on the last day). Nightmare scenario #2 failed to happen as well… no tears. That doesn’t mean that people loved everything they read. There were flaws to be addressed, but everyone did so quite professionally. Probably helped that I was the only person in our group that had never participated in a workshop. They knew what to expect and came prepared for the experience.

The days consisted of panels, critique sessions, meals, and time in the bar. Many discussions and never a dull moment. There were plenty of laughs as well (I could tell you the pickle-sniffing story, but I probably couldn’t do it justice, so it will remain an inside joke–I hear a sigh of relief). It was a very enjoyable experience.

Saturday night a couple of us drove–an adventure in itself–to Seattle for some quick sight-seeing, dinner, and the Locus Awards party. (The awards were earlier in the day–I lost–but there a lot of friends in town that I wanted to say hi too.) 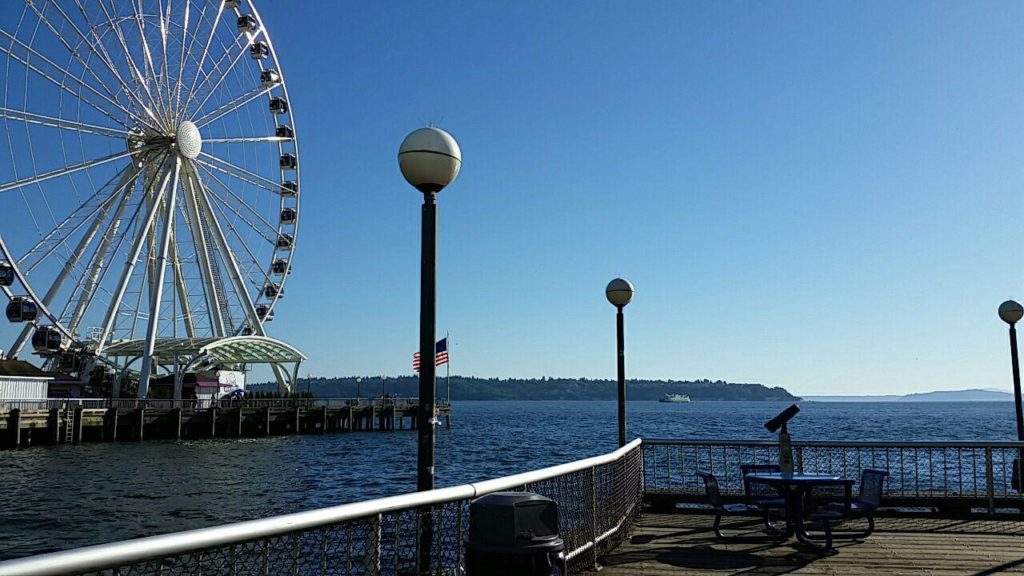 The evening moved quickly and I didn’t have time to talk to everyone I saw there, but I was really glad to have the chance. It was particularly nice to meet people I’ve worked with but never seen in person. I really need to find a way to get out to the West Coast more often.

After the party, our little group journeyed back to the hotel and gravitated towards the hotel bar where we joined up with workshop participants and the influx of people who had recently left the Roger Waters concert down the street.

I stayed up much too late, but it was near the end and I didn’t want to miss a thing. I ended up with a normal amount of sleep for me, but I forgot how much anxiety or stress takes away from me. (I was working around my impostor syndrome and trying to feel like I was qualified to be there.)

Sunday morning arrived much too quickly. All that remained was our final individual meetings and some panels. It all went very quickly, goodbye were said to new friends and a few panelists I knew previously and I retreated to the lobby. I figured I’d join the other group leaders–we were all leaving the next day–for dinner, but the plug was pulled and I started to crash. I walked up the hill to a Subway to get a sandwich for dinner, came back and made arrangements to join the others in the bar later. Back in my room, I lay down for a minute and woke up three hours later. Never did get a chance to say goodbye to the others. My flight was early–I left the hotel at 3:15AM–so I checked the bar–it was closed–and went back to my room for a little more sleep.

Had a nice chat with Patrick Swenson as he drove me back to the airport, and that was the end of my Cascade adventure. I’m glad to have had to experience and maybe next time I won’t find the prospect of workshop critiques so damn terrifying. (nah, but at least I know I can survive it now)

And to my group, thank you! I hope my contributions were helpful to you. I look forward to seeing your work in the wild!

If you ever have the opportunity to attend Cascade Writers or participate in some manner, take it. You won’t regret it.