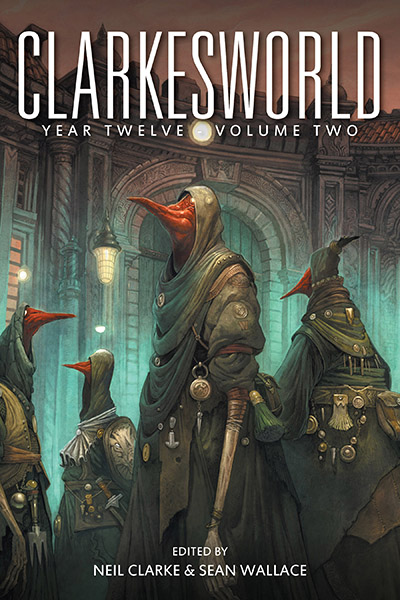 Since 2006, Clarkesworld Magazine has been entertaining fans with their brand of unique science fiction and fantasy stories. Collected here are all of the stories this Hugo and World Fantasy Award-winning magazine published during the second half of their twelfth year. Includes stories by Kelly Robson, Kij Johnson, Lavie Tidhar, Vajra Chandrasekera, Robert Reed, Rich Larson, Hao Jingfang, and many more!

Introduction by Neil Clarke
Gubbinal by Lavie Tidhar
The Anchorite Wakes by R.S.A. Garcia
Logistics by A.J. Fitzwater
Not Now by Chelsea Muzar
Waves of Influence by D.A. Xiaolin Spires
Heron of Earth by Vajra Chandrasekera
The James Machine by Kate Osias
Kingfisher by Robert Reed
The Wings of Earth by Jiang Bo
The Veilonaut’s Dream by Henry Szabranski
Fleeing Oslyge by Sally Gwylan
The Privilege of the Happy Ending by Kij Johnson
Your Multicolored Life by Xing He
Without Exile by Eleanna Castroianni
A Vastness by Bo Balder
Violets on the Tongue by Nin Harris
To Fly Like a Fallen Angel by Qi Yue
Farewell, Doraemon by A Que
The Cosmonaut’s Caretaker by Dora Klindžić
A Space of One’s Own by Steve Rasnic Tem
Carouseling by Rich Larson
A Gaze of Faces by Mike Buckley
For What are Delusions if Not Dreams? by Osahon Ize-Iyamu
The Loneliest Ward by Hao Jingfang
Vault by D.A. Xiaolin Spires
A Study in Oils by Kelly Robson
The Foodie Federation’s Dinosaur Farm by Luo Longxiang
Dandelion by Elly Bangs
About the Authors
Clarkesworld Census
About the Editor