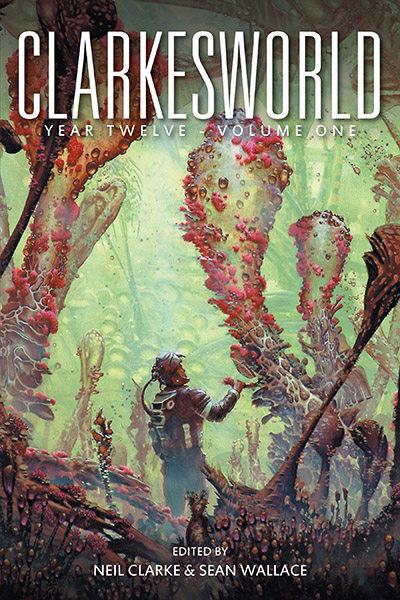 Since 2006, Clarkesworld Magazine has been entertaining fans with their brand of unique science fiction and fantasy stories. Collected here are all of the stories this Hugo and World Fantasy Award-winning magazine published during the first half of their twelfth year. Includes stories by Kij Johnson, Robert Reed, Carolyn Ives Gilman, Juliette Wade, E. Lily Yu, Tobias S. Buckell, and many more!

Introduction by Neil Clarke
The Last Boat-Builder in Ballyvoloon by Finbarr O’Reilly
Obliteration by Robert Reed
Sour Milk Girls by Erin Roberts
Farewell, Adam by Xiu Xinyu
Say it Low, then Loud by Osahon Ize-Iyamu
The Rains on Mars by Natalia Theodoridou
Tool-Using Mimics by Kij Johnson
Landmark by Cassandra Khaw
The Psychology Game by Xia Jia
Dead Heroes by Mike Buckley
Darkness, Our Mother by Eleanna Castroianni
Who Won the Battle of Arsia Mons? by Sue Burke
Falling in Love with Martians and Machines by Josh Pearce
The Power is Out by A Que
The Persistence of Blood by Juliette Wade
Intro to Prom by Genevieve Valentine
A Cigarette Burn In Your Memory by Bo Balder
Retrieval by Suzanne Walker
The No-One Girl and the Flower of the Farther Shore by E. Lily Yu
The Catalog of Virgins by Nicoletta Vallorani
Unplaces: An Atlas of Non-existence by Izzy Wasserstein
The Nightingales in Plátres by Natalia Theodoridou
Prasetyo Plastics by D.A. Xiaolin Spires
Crossing LaSalle by Lettie Prell
The Sum of Her Expectations by Jack Skillingstead
Deep Down in The Cloud by Julie Nováková
The Lighthouse Girl by Baoshu
A World to Die For by Tobias S. Buckell
Umbernight by Carolyn Ives Gilman
About the Authors
Clarkesworld Census
About the Editor