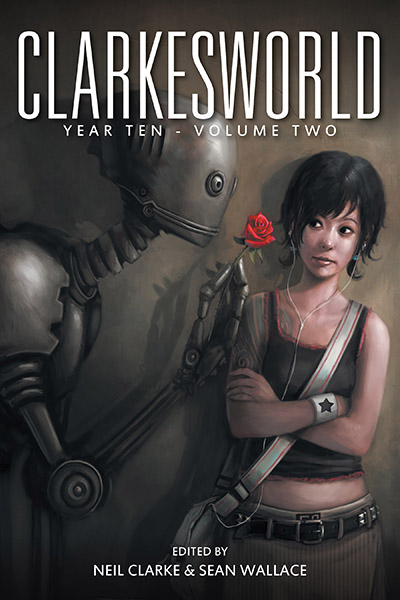 Since 2006, Clarkesworld Magazine has been entertaining fans with their brand of unique science fiction and fantasy stories. Collected here are all of the stories this Hugo Award-winning magazine published during the second half of their tenth year. Includes stories by Carolyn Ives Gilman, Sam J. Miller, Emily Devenport, Rich Larson, Cat Rambo, Chen Qiufan, E. Catherine Tobler, Robert Reed, John Chu, and many more!

Introduction by Neil Clarke
And Then, One Day, the Air was Full of Voices by Margaret Ronald
Against the Stream by A Que
Jonas and the Fox by Rich Larson
The Bridge of Dreams by Gregory Feeley
Balin by Chen Qiufan
Now is the Hour by Emily Devenport
The House of Half Mirrors by Thoraiya Dyer
Aphrodite’s Blood, Decanted by Jennifer Campbell-Hicks
The Opposite and the Adjacent by Liu Yang
The Universal Museum of Sagacity by Robert Reed
The Cedar Grid by Sara Saab
Alone, on the Wind by Karla Schmidt
Breathe by Cassandra Khaw
The Sentry Branch Predictor Spec: A Fairy Tale by John Chu
Teenagers from Outer Space by Dale Bailey
Sephine and the Leviathan by Jack Schouten
Fish Dance by Eric Schwitzgebel
Left Behind by Cat Rambo
Toward the Luminous Towers by Bogi Takács
Reclamation by Ryan Row
Helio Music by Mike Buckley
Away from Home by Luo Longxiang
The Green Man Cometh by Rich Larson
The Engines Imperial by Sean Bensinger
.identity by E. Catherine Tobler
The Despoilers by Jack Skillingstead
The Snow of Jinyang by Zhang Ran
First Light at Mistaken Point by Kali Wallace
Things With Beards by Sam J. Miller
Touring with the Alien by Carolyn Ives Gilman
About the Authors
Clarkesworld Census
About Clarkesworld