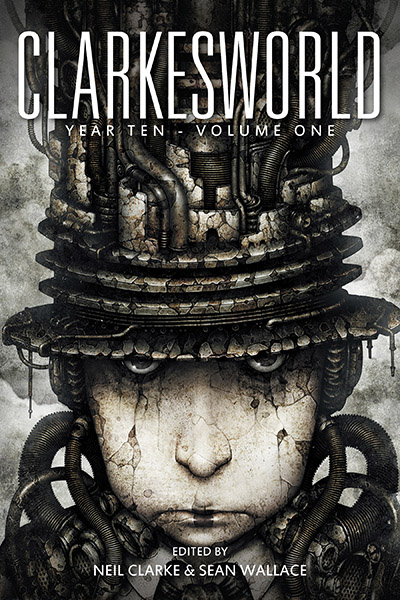 Since 2006, Clarkesworld Magazine has been entertaining fans with their brand of unique science fiction and fantasy stories. Collected here are all of the stories this Hugo Award-winning magazine published during the first half of their tenth year. Includes stories by Cixin Liu, Kij Johnson, Seth Dickinson, Tamsyn Muir, Paul McAuley, Naomi Kritzer, Rich Larson, Xia Jia, Robert Reed, and many more!

Introduction by Neil Clarke
Extraction Request by Rich Larson
The Algorithms of Value by Robert Reed
The Abduction of Europa by E. Catherine Tobler
Seven Cups of Coffee by A.C. Wise
Chimera by Gu Shi
Morrigan in Shadow by Seth Dickinson
Yuanyuan’s Bubbles by Cixin Liu
Union by Tamsyn Muir
The Fixer by Paul McAuley
When We Die on Mars by Cassandra Khaw
The Father by Kola Heyward-Rotimi
Egg Island by Karen Heuler
Your Right Arm by Nin Harris
That Which Stands Tends Toward Free Fall by Benjanun Sriduangkaew
Salvage Opportunity by Jack Skillingstead
The Hexagonal Bolero of Honeybees by Krista Hoeppner Leahy
The Governess with a Mechanical Womb by Leena Likitalo
Between Dragons and Their Wrath by An Owomoyela and Rachel Swirsky
If on a Winter’s Night a Traveler by Xia Jia
Coyote Invents the Land of the Dead by Kij Johnson
In the Queue for the Worldship Munawwer by Sara Saab
In the Midst of Life by Nick Wolven
And If the Body Were Not the Soul by A.C. Wise
Ice by Rich Larson
Everybody Loves Charles by Bao Shu
Summer at Grandma’s House by Hao Jingfang
So Much Cooking by Naomi Kritzer
About the Authors
Clarkesworld Census
About Clarkesworld