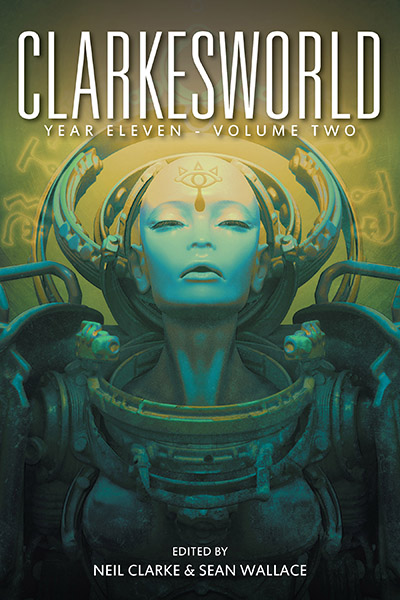 Since 2006, Clarkesworld Magazine has been entertaining fans with their brand of unique science fiction and fantasy stories. Collected here are all of the stories this Hugo Award-winning magazine published during the second half of their eleventh year. Includes stories by Suzanne Palmer, Sam J. Miller, Kelly Robson, Chen Qiufan, Nicole Kornher-Stace Juliette Wade, and many more!

Introduction by Neil Clarke
The Ways Out by Sam J. Miller
Pan-Humanism: Hope and Pragmatics by Jess Barber and Sara Saab
Reversion by Nin Harris
Möbius Continuum by Gu Shi
An Account of the Sky Whales by A Que
Fool’s Cap by Andy Dudak
The Stone Weta by Octavia Cade
Left of Bang: Preemptive Self-Actualization for Autonomous Systems by Vajra Chandrasekera
Conglomerate by Robert Brice
The Bridgegroom by Bo Balder
In the Blind by Sunny Moraine
Little /^^^\&- by Eric Schwitzgebel
The Person Who Saw Cetus by Tang Fei
The Robot Who Liked to Tell Tall Tales by Fei Dao
Sunwake, in the Lands of Teeth by Juliette Wade
Last Chance by Nicole Kornher-Stace
Streams and Mountains by Nick Wolven
Antarctic Birds by A. Brym
An Age of Ice by Zhang Ran
Baroness by E. Catherine Tobler
Some Remarks on the Reproductive Strategy of the Common Octopus by Bogi Takács
A Man Out of Fashion by Chen Qiufan
Neptune’s Trident by Nina Allan
My Dear, Like the Sky and Stars and Sun by Julia K. Patt
Travelers by Rich Larson
Twisted Knots by D.A. Xiaolin Spires
The Significance of Significance by Robert Reed
We Who Live in the Heart by Kelly Robson
The Secret Life of Bots by Suzanne Palmer
About the Authors
Clarkesworld Census
About Clarkesworld