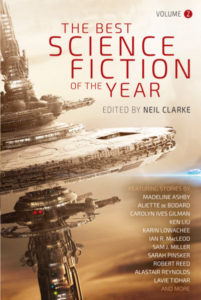 The Best Science Fiction of the Year: Volume 2 was published earlier this month in trade paperback and ebook. Each year, there are more good stories than I can fit in the book, so I include a recommended reading list at the back of the book to give them the recognition they deserve. That list is duplicated here: