Lisa gave me an Amazon Echo Dot for Christmas. If you don’t know what that is, just think of it as a little box (Alexa) that will try to do what I tell it to. Not a robot, but it’s as close as I’m getting for now. 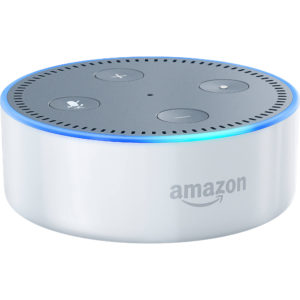 We already had a WeMo Smart Plug connected to one of our lights, so fortunately, it has something to play with. On the down side, this means that all it’s really doing at the moment is turning the light on and off for me–something I am more than capable of doing myself. “Alexa, turn on the family room light.”

I had hoped this would also handle more of the entertainment side of the house, namely music and video. I figured I’d need something special for that, but it turns out that Amazon’s Fire Stick, the product that is supposed to compete with Google’s Chromecast, doesn’t talk to Dot. It has its own instance of Alexa. That seems like a fairly significant mistake on their part.

“Alexa. Can you do anything I want?”

“Hmm. I’m not sure what you meant by that question.”

It was suggested that I hardwire the Dot to the stereo via its external speaker jack, but unfortunately, that causes the on-board speaker to be disabled. If the stereo is off, which is typically is, I wouldn’t be able to hear the responses from Alexa. Fortunately, they weren’t as foolish with the design of Alexa’s bluetooth support. Unfortunately, my stereo doesn’t include a bluetooth receiver. I’ve had to buy one.

[Alexa rattles off some models from Amazon and I confirm an order for one of them.]

That solution will only take me part of the way there. I still can’t control the TV or Stereo. After doing some research, I’ve decided to go with a Logitech Harmony Smart Hub which Alexa can control through ifttt. That will allow me to tell the Alexa to change the source inputs for the different configurations we use that system for (TV, Roku, XBox One, Music).

We’ll see how all this works out. If it doesn’t, I’m still capable of getting out of the chair, finding all the remotes, and pressing the right buttons myself. At worst, I’ll be asking Alexa how she wants me to return all this stuff.

Welcome to the future.