2022 Submissions by Length and Genre and Volume

When I updated the submissions system, I created a few new reports for story length and genre distribution, so the second in my 2022 submissions data dive will focus there.

I noticed that our inventory of novelettes was a bit shorter than normal in late September. The small growth in October is a direct result of call I put out on social media, but it was a very temporary effect.

And here’s how 2022 looks in comparison to previous years:

This graph clearly demonstrates when we’ve increased our word count limits, but it also confirms my suspicions about the downturn in novelettes. We’ll probably have to put out regular calls for more novelettes until this corrects itself. I would actually like to see this grow by more than a few percentage points in 2023.

You can barely see them, but there are tiny spots of Horror in there. Those are people who ignored our guidelines, a warning on the old submissions page, and submitted a story anyway. Other typically includes a bunch of things we don’t publish, but is sometimes used by authors of magical realism stories when they can’t bring themselves to call it Fantasy. Blends are covered by SFF (Science Fiction blended with Fantasy), SFH (Science Fiction with Horror), and FH (Fantasy with Horror, or Dark Fantasy). Science Fiction was the most popular genre for our submissions in 2022.

Once upon a time, we did accept horror submissions. You can clearly see that ended in 2018. (A shrinking because it happened during 2018 and a virtual absence after.) From that point forward, Other and Dark Fantasy grew a little bigger. Some of that was caused by the redistribution of the percentages, but the majority of it can be attributed to some authors ignoring the guidelines. (They thought we wouldn’t  notice when they hid horror in there.) Eliminating horror submissions did result in a decrease in submissions, so it was only a small percentage that decided to play that game.

Here’s a look at submissions opened by year: 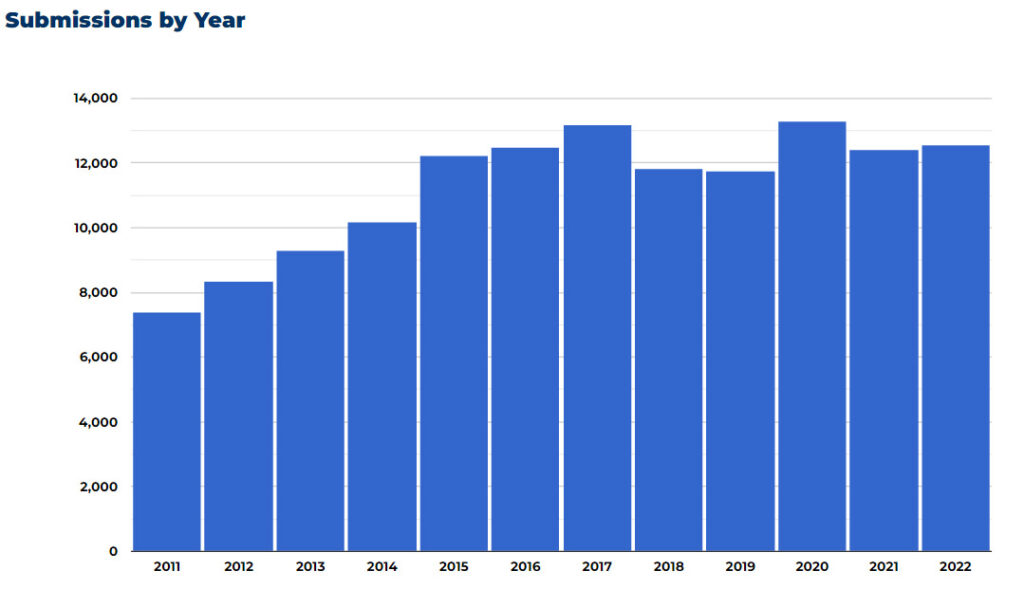 Prior to 2018, we had annual increases in submission volume. You can see how eliminating horror impacted submissions in 2018 and 2019. (Most of the authors submitting horror at the time stuck to their genre, so declines of this amount were anticipated.) Courtesy of the pandemic, 2020 was a wild year for submissions and an anomaly in the data. 2021 and 2022 appear to demonstrate a return to stability and slow growth in submissions. There were some changes though… but that’s a story for next time.