For several years now, I’ve been involved in publishing and promoting translated science fiction. If you haven’t heard, there’s now a proposal to create a Hugo Award for Best Translated Novel. (The only place I’ve seen it mentioned is here: http://file770.com/best-translated-novel-hugo-category-proposed/)

The biggest problem I have with this proposal is the message it sends not only to domestic readers, but foreign authors, editors, and publishers: translated works are not as good as ours, so we’re making a special category for you so you can get awards too. I don’t believe that’s the intention of those who drafted this proposal. I think they approached it with the best of intentions, but simply got it wrong. For years now, I have been making the case that we should be treating translated and international works as equals: stories worthy of standing alongside those we have routinely seen published. This proposal sends the opposite message, and on those grounds intend to vote no.

Translated works are capable of winning the Hugo without any special treatment. As they point out in their own commentary, three translated works have won since 2015, despite the relatively low number of translations published among a wide sea of domestic releases.

If the source of the perceived problem is that not enough people are reading translations to provide a fair opportunity at nomination, though, then I would suggest that a special Hugo is not the solution to the problem and that their predicament is not unique. The same argument can be made for a wide array of self-published, small press, or even limited edition works.

I’ll counter their Wollheim quote with one by Lester Del Rey:

“…our stories are set to large numbers of fans and translators all over the world, while our own authors and fans seldom get even a hint of the work being done in our field by others. We’re in serious danger of becoming the most provincial science-fiction readers—and writers—on earth.” (International Science-Fiction, June 1968.)

That prediction came to pass and those three Hugos—among other things—are demonstrating that we might actually be waking up from that long provincial nap. The stigma of translations is starting to fade and more publishers are beginning to invest in these efforts. That said, there’s still a mountain of progress to be made with the wider community of readers, editors, and publishers. That’s a marketing problem and not one to solve with a Hugo.

I’m also concerned by the decision to specifically single out novels, when translations are possible across all categories. The proposal even draws comparison to the Academy Award’s “Best Foreign Film,” which it could have just as easily argued as a category for the Hugos, but didn’t. If the motivation was based on the body of work in a category, then surely the short fiction categories would have been more worthy of consideration as the greatest variety of translated science fiction and fantasy can be found there. If the selection of novel is based on the prestige of the category, then they are suggesting one of lesser prestige for those works to compete in.

Others might justify the category by saying that many non-Anglophone countries also include special awards for translated works—often in multiple categories. That, however, is often born of circumstances not applicable here. Anglophone SF is something of an invasive species in many markets. Our translated works can saturate a field, sometimes representing more than 50% of the novels published in a year. As a result, these awards have segregated in a way that allows their local communities to flourish. It’s a matter of pride to celebrate one’s own local community, particularly when another’s community dominates—even if it’s only a perception of quality. The inverse is not true. Breaking off translated works on their own reinforces the negative perception that anglophone SF is the king of the hill and that they aren’t welcome or as worthy. Every time a translated work wins, it helps shatter that illusion. Please don’t take that away.

[Side note: In short fiction, we have a several decades long history of well-meaning people trying to increase the audience for translated works in our field. Often this has been done by bundling translations together and setting them aside from domestic works. People who have an existing bias against translated works–or even foreign films–aren’t going to engage with narrowly-focused efforts. It’s simply preaching to the choir. This category would continue down that path.]

Friday
4:00 PM (Salon 4) The Spectrum of Short Fiction SF/F Editing
Mike Allen, Scott H. Andrews, Neil Clarke, Ellen Datlow, Mary Anne Mohanraj (mod), Sheila Williams
This panel of SF/F magazine and anthology editors will discuss different approaches to their work, from very hands-on to very hands-off. What are currently accepted best practices for editing — if consensus even exists on that — and how have they changed over time? Do editors still commission stories and collaborate almost to the point of coauthoring, or is that era over? And how can a writer submitting a story know what kind of editing they’re likely to get?

Saturday
2:00 PM (Salon B) Translation and Embedded Assumptions
Anatoly Belilovsky, John Chu, Neil Clarke, Pablo Defendini, Tamara Vardomskaya (mod)
In an interview with Fran Wilde, Emily Wilson described the effect of embedded cultural assumptions in translating The Odyssey — not only the assumptions in the original Greek, but the assumptions that past English translators have imposed on the text. Panelists will discuss how translators can and should approach these challenges.

You’ll also be able to find me at the Clarkesworld table in the Dealer’s Room.

The Chesley Awards were presented tonight at Spikecon (aka Westercon 72, NASFiC 2019,1632 Minicon, and Manticon 2019). I wish I could have found a way to make the trip out to Utah to attend, but it just wasn’t in the cards.

The good news is that Arthur Haas won the Chesley for Best Magazine Cover for Clarkesworld issue #140: 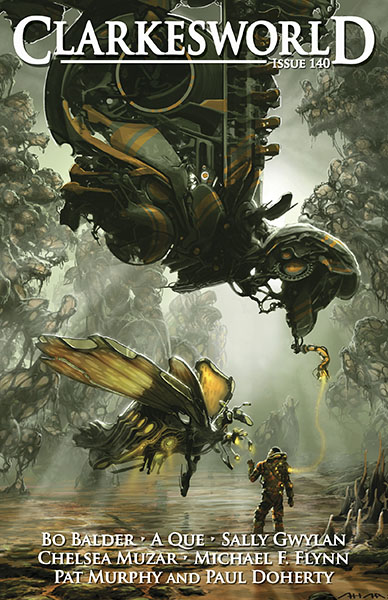 and I won the Chesley Award for Best Art Director! What a night!

A big thank you goes to all the members of ASFA for this honor. Congratulations to all the other winners (and finalists) as well. A full list can be found on ASFA’s Facebook page.

When I’m selecting stories for The Best Science Fiction of the Year anthologies, there are always more amazing stories than I can possibly fit in the anthology. Towards the end, the calls can be very difficult and sometimes influenced by the amount of space left in the book or the availability of the work itself. (Believe it or not, sometimes a story is contractually prevented from being reprinted in a year’s best anthology.)

Here are the stories that I couldn’t include and instead listed in the Recommended Reading section of The Best Science Fiction of the Year: Volume Four:

The Best Science Fiction of the Year: Volume Four can be ordered from:

Looking for Interviewers for Clarkesworld Magazine

This month is Chris Urie’s last month as interviewer at Clarkesworld Magazine. We’re sad to see him leaving us in this capacity, but fortunately he won’t be leaving us entirely. (Chris started as a slush reader and has asked to rejoin the slush team.)

When a position goes vacant, I look at it as an opportunity to rethink what we’re doing. This means that the new person (or persons) that end up working on our interviews will have an opportunity to help shape how we do these moving forward.

If you are interested in being an interviewer for Clarkesworld Magazine, here’s a few things you should know:

If you are interested, please fill out this application: https://forms.gle/3rvWUHdqYESu1FtCA

ALL INFORMATION IN APPLICATIONS WILL BE KEPT CONFIDENTIAL.
The only people reading these are Neil Clarke and Kate Baker.

The fourth volume in my Best Science Fiction of the Year series is officially out today! This is the first volume (and my first US anthology) to be available in hardcover. Most bookstores list that as coming later this month, but the publisher tells me they’ve already shipped to bookstores and will be heading out to customers ahead of schedule.

This volume is dedicated to Gardner Dozois. 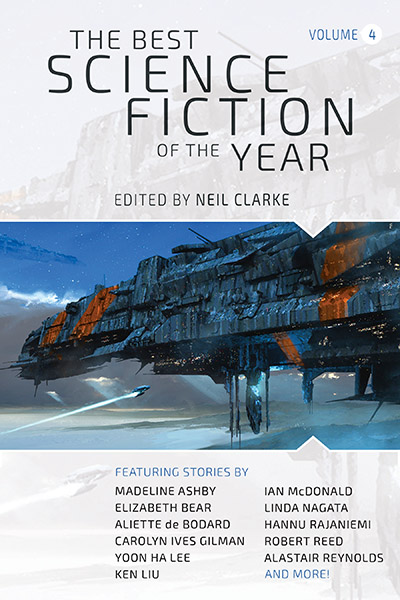