The Final Frontier gets a starred review 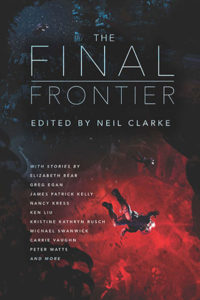 “Clarkesworld editor Clarke’s stellar reprint anthology explores the expansive variety of space exploration stories, in shades from brutal to elegantly poetic… Clarke has brought together outstanding works in which extreme environments bring out the best and worst of human nature.”

or preorder the ebook from:

Reminder: If you edit, publish, or write SF short stories, novelettes, and/or novellas and want to make sure they are considered for inclusion in THE BEST SCIENCE FICTION OF THE YEAR, you should read these guidelines: neil-clarke.com/the-best-science-fiction-of-the-year-2018-submissions

Why Clarkesworld is no longer available on Magzter

For some time now, I have been trying to track down the source of pirated copies of Clarkesworld that would appear moments after subscriptions were filled. After some time, I was able to narrow the problem down to issues distributed through Magzter. On one occasion, I found a pirated copy after only two of their customers had downloaded that month’s issue. I emailed support and asked for assistance in identifying the source (providing the details I had discovered–times, customer numbers) and was ignored. (They don’t share subscriber information with publishers.) I emailed then again on two separate occasions–one directly to someone who had emailed me first–, but neither of those were responded to either.

Finally, at the end of May, I gave up on them. The best way to solve the problem was to cut them off. I logged into my account and discovered that there were no options to remove a publication or back issues from their site. I then emailed them the following:

Hi,
After failing to receive responses to multiple complaints about your platform being the source of pirated copies of our magazine, we have decided to terminate our relationship with Magzter and remove our publication from your site.
It appears as though you have made it difficult to do this, so please provide instructions by which we can do so, or remove them yourself and inform us when the process has been completed.
Thank you,
-Neil

THAT got their attention. Within three hours I had the following reply (which was also copied to several other people in the company):

Dear Neil,
Could you send us the URL.
We have all of the piracy issues fixed already and we don’t find any new magazines getting pirated.

Aside from the signature, that’s all there was to the reply.

As an aside, let me direct your attention to their publisher terms and conditions (www.magzter.com/publisher/terms), specifically this part of section 3.4.2:

Provided that in the event Magzter learns of any such piracy, Magzter shall inform the Publisher thereof and provide the Publisher with details thereof (to the extent such details are known to and available to Magzter).

The above email basically admits that they knew there were problems, were silently dealing with them in the background, and going by all  the emails I’ve received from them over the years, never telling publishers about it, despite the promise to do so.

You seem to think I was merely threatening to leave Magzter over this. You’ve already missed the opportunity to fix it. Please just answer my question and tell me how to withdraw our magazine and back issues from your site. That will solve my problem.

Dear Neil,
Sure, I shall assist on the removal process.
But I would request you to share us the link since our firewalls have been strengthened and there is no such issue as of now.
Since you have been our prestigious client we dont want to miss you.

This is interesting because it more or less says that their own poor security was to blame for at least some of the piracy. I can say it didn’t solve the problem as I had just finished filing the latest batch of DMCA complaints for copies I know came from their site.

We went back and forth with them one more time asking for links/files but not doing what I had asked them to. Frustrated, I told them they were only making the situation worse by dragging it out. They finally relented and said they’d end subscriptions. I had to remind them again that I had asked them to terminate all back issue sales as well. (It wasn’t part of the instructions to another employee that I was copied on.)

Twelve days later the subscriptions and back issues were still available for sale, so they got another email. They replied “This will be removed very soon and surely will update you on Monday EOD.”

Late Tuesday, it is still available for sale and there has been no update. I email them again and get an excuse that they had been on emergency leave. That explains the lack of email–at best, assuming I believe anything they say now–but not the lack of action by the other employees who had been told to carry out the action.

They finally remove the magazine the next day.

Three days later, I do another check of their site and find articles from some of our issues are available on their site for free. Another email. Another apology. Finally, we are free.

I know we’ll never eliminate piracy, but it was rampant while we were working with them. The number of DMCA complaints I’ve had to make this month–the first month away from them–is down 90%. That says something.

If you were one of the few people subscribing to Clarkesworld on Magzter, my apologies, but this had to be done. There are many other places you can subscribe that don’t cause problems for their publishers and I hope you’ll consider subscribing through one of them instead.

If you’re a publisher, I’m posting this in part for you too. Obviously they’ve had security problems and haven’t been communicating. You deserve to know.