Readercon is coming! Here’s my schedule:

2:00 PM    F    The Future of Speculative Magazines, Part 3.
Scott Andrews (leader), John Benson, Leah Bobet, Neil Clarke, Ellen Datlow.
At Readercon 20, there were two very well-attended panels that looked at the future of magazines: “The Future of Speculative Fiction Magazines, Part 1: Print Magazines,” and “Part 2: Online Magazines.” Six years later, we return to this issue to discover what worked, what didn’t, whether magazines are any better off, and what the near future might hold.

12:00 PM    F    Insider Tips and Tough Truths of the Publishing Business.
Neil Clarke, David G. Hartwell, Brett Savory, Gordon Van Gelder, Sheila Williams.
SF/F publishing can seem intimidating and shadowy from the outside. This panel of experienced professionals in the field—authors, editors, agents, and others—will shed light on some of those dark corners and share insider secrets and other key information about the current state of the industry.

I’ll also be in the Dealer’s room at the Clarkesworld table selling magazines and running my annual fire sale on old inventory from my long-closed bookstore.

Earlier today, I engaged in a Twitter conversation about first rights for short stories/novelettes/novellas. Over the course of the conversation, it became clear that it would be nice to have a single page I could link to from the submissions guidelines of the various projects I’m involved in.

There was some debate on this topic, so I will start by saying that I am not the final authority on this issue for anything but the magazines and anthologies I’m editing. This includes The Best Science Fiction of the Year, in which case my definition will overrule that of the editor of the publications I select stories from.

In over-simplified terms this means the person/publisher that gets to publish the story first. If there are restrictions (First English Language, First Electronic, etc) then it is the first to publish to that particular subset. NOTE: Obviously unrestricted first rights are no longer available the moment a subset of those rights are sold.

These days, there are many ways to publish a story. It’s not always as clear-cut as appearing in a book or magazine. You have to think of publishing as distribution. There are some obvious situations that make it clear that the story has been published:

Here are a few examples of situations where a story has been published:

Here are a few example of situations that don’t count as publication:

First rights, once used, are gone forever. There is no undo.

Stories that have already been published can be sold or published again as reprints. (The original publisher may have a fixed period of exclusivity on the story that prevent you from selling reprint rights before a certain date. Some even limit where it can be reprinted. Pay attention to your contracts.)

Publishers looking for first rights or original stories are, by definition, excluding reprints.

Please ask questions in the comments. I will update the document as additional examples are brought to my attention.

The last thirty days in slush

This is how they break down by genre: 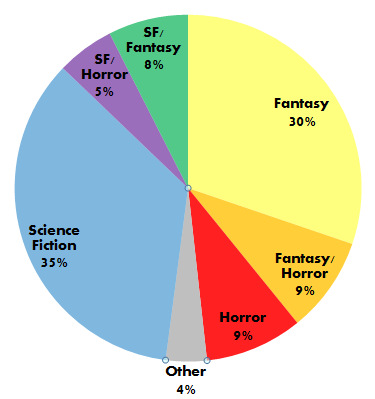 We’ve decided to change the word count and pay rate at Clarkesworld. We will now consider stories up to 16000 words long.

For several years now, I’ve capped the upper limit on Clarkesworld’s original fiction at 8000 words. There were several good reasons for doing that, but they were mostly financial.

This past week, we passed our latest Patreon goal and secured funding for a fourth original story in every issue. Add in the translations that will be in every issue and that’s five originals, two reprints. Assuming the Patreon pledge levels hold, this puts us in a situation that provides me with some flexibility.

I’m considering raising our upper limit to 16000 words. That would take us firmly into novelette territory. (Right now, we barely scrape it.) Each issue would feature no more than one novelette. In the issues we feature a novelette, it would absorb two story slots and leave the issue with four originals, two reprints. Given how few we’d be able to publish, they’d be harder sells, but it does give us (and authors) more flexibility. We would also accompany this change with an increase in pay rate on the 4000+ side of our scale.

I’ve already talked this over with Sean and Kate. Any readers or authors have some thoughts they’d like to share?