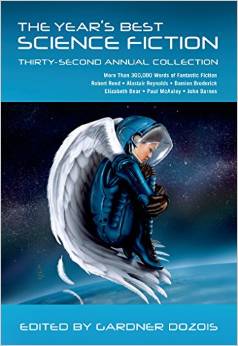 Gardner Dozois has announced (on Facebook) the table of contents for The Year’s Best Science Fiction, Thirty-Second Annual Collection. It includes:

One Year on Patreon – Pros and Cons

In early 2014, I detailed the strengths and weaknesses I observed as a magazine and podcast publisher using Patreon. Since that post is still receiving a fair amount of traffic, I thought it only fair to write up a new pros and cons list that better reflects where Patreon is today.

Patreon is a cross between subscriptions and Kickstarter. Unlike Kickstarter, Patreon doesn’t focus on a one-time project. It’s aimed at fundraising for long-term projects that include recurring creations, like issues of a magazine or episodes of a podcast. In our case, your Patreon pledge is a per-issue contribution to the magazine.

Clarkesworld Magazine has had a Patreon page for a little over a year now. At this time, we have $662 in monthly pledges from a total of 177 patrons. We successfully unlocked our first goal of $500, which allowed us to add a story to every other issue. The next goal is at $750. We have never been one of their featured sites.

Clarkesworld has an online readership of over 35,000 and a monthly podcast listenership that is over 9,000. The percentage of readers/listeners actively supporting us through Patreon or other avenues (ebook subscriptions, PayPal donations, Joyride, etc.) is disappointingly small, but this is not a reflection on Patreon or any of the other services we use. Part of the problem is marketing, but the big challenge is convincing people to support what they can get for free. We’re not alone in this. Talk to PBS sometime. What this means is that we still have a large number of potential supporters.

1. Discoverability – While they’ve fixed searching and added tags, category tags are very broad and it when you view the category, it appears to only list featured creators. Personally, I’d love to see them implement strong categorization similar to what Kickstarter has done with their DISCOVER button and make it a breeze to find projects I’m interested in. (Go play there and see for yourself.) It might also be fun to have the ability to nominate people to be featured. Right now that’s a bit of a black box.

2. Payment Processing – My prior problem as a monthly content creator went away when I discovered the MONTHLY CAMPAIGN checkbox on the edit my campaign page. Now I don’t need to worry about whether or not pledges come in after I’ve posted new content. Patreon now matches our schedule.

I didn’t mention it last time, but there is one problem in this category. I’m not sure why, but it can take days to process a pledge. Maybe it’s a volume thing, but I’ve never had any other monthly service not be able to bulk process charges in a few hours. Just for clarity here, I’m not nitpicking about declined charges. Those happen and they’ve been good about trying to get those situations straightened out. They’ve also been very clear in stating the processing time. This won’t be a problem for many people, but in our case, we have a subscription reward tier and those have to go out on the first… which is the same day they process charges.

3. New – This was bound to fix itself if everything was going well. Patron is now processing over one million in pledges every month. There are still a lot of people who are unfamiliar with them, but they’ve also received fifteen million in funding from investors, so expect their visibility to continue to grow.

1. Support and Service – I’ve had to use it less often than in the past (which is a testament to their design), but their support staff are top-notch and easy to work with. I don’t know many who do it better. In fact, I should probably ask them about the above payment processing problem. (I can’t imagine that they don’t already know and are working on it. That’s what I’ve come to expect from them.)

2. Growing Community – I don’t know if our experience had anything to do with it, but I now see a number of my colleagues using Patreon and a few of our supporters supporting them (and vice versa). That’s great for all of us and I expect to see more and more people launching Patreon pages in the years ahead.

3. We’re Getting Paid – While it might take a few days to process the payments, everything runs smoothly and they’ve even added a direct deposit option. Patreon is now an important part of our business model.

4. Opportunity – A year later, I still feel like we’re in the early days of something big. Being in early has certainly had benefits for us and I’m sure those coming in now will have similar experiences assuming they don’t assume Patreon to be a magic money box.

After a year, I am still very pleased with Patreon and continue to recommend it to people. While I continue to have some issues with the service, it has built a strong foundation and they appear to have the intelligence, staffing, and resources to grow into something even more impressive. Listen to them talk sometime. It can be quite motivating.

In the meantime, I have to learn to become better at marketing. I can’t expect them to shoulder the discoverability problems on their own. We have a large audience of people that aren’t currently supporting us. That’s on me. Patreon is one of the tools in my kit, but I still have to learn to use it more effectively.

That said:
Visit patreon.com/clarkesworld and sign up to become one of Clarkesworld’s patrons today!

The December 2014 issue of Clarkesworld Magazine is now available. You can get the issue: FICTION
“Fatima’s Wound” by Kali Wallace
“The Magician and Laplace’s Demon” by Tom Crosshill
“Now Dress Me in My Finest Suit and Lay Me in My Casket” by M. Bennardo
“No Vera There” by Dominica Phetteplace
“The Emperor of Mars” by Allen M. Steele
“The Sledge-Maker’s Daughter” by Alastair Reynolds
“Tongtong’s Summer” by Xia Jia
NONFICTION
Contemporary Chinese Science Fiction by Ken Liu
In Civilized Society: A Conversation with Kameron Hurley by Alvaro Zinos-Amaro
Another Word: Endings by Daniel Abraham
Editors Desk: Giant Heads by Neil Clarke
PODCAST
This month’s stories will be released in audio form over the course of the month. Read by Kate Baker.
COVER ART
The Magpie God by Lake Hurwitz