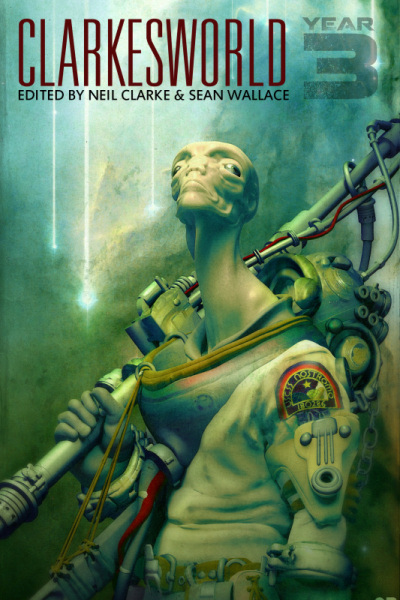 The Clarkesworld Anthology series continues (with the name of the series now changed from Realms) with Clarkesworld: Year Three, featuring all of the stories published in Clarkesworld Magazine during our third year of publication. A trade paperback edition will be available late February. PREORDER HERE.

Introduction by Neil Clarke
Non-Zero Probabilities by N. K. Jemisin
The Second Gift Given by Ken Scholes
Walking with a Ghost by Nick Mamatas
Celadon by Desirina Boskovich
Teaching Bigfoot to Read by Geoffrey W. Cole
The Radiant Car Thy Sparrows Drew by Catherynne M. Valente
The Jisei of Mark VIII by Berrien C. Henderson
Passwords by John A. McDermott
Idle Roomer by Mike Resnick and Lezli Robyn
From the Lost Diary of TreeFrog7 by Nnedi Okorafor
Gift of the Kites by Jim C. Hines
batch 39 and the deadman’s switch by Simon DeDeo
Rolling Steel: A Pre-Apocalyptic Love Story by Jake Lake and Shannon Page
The Completely Rechargeable Man by Karen Heuler
Episode 72 by Don Webb
Placa del Fuego by Tobias S. Buckell
Herding Vegetable Sheep by Ekaterina Sedia
The Devonshire Arms by Alex Dally MacFarlane
The Loyalty of Birds by Rachel Sobel
The Giving Heart by Corie Ralston
White Charles by Sarah Monette
On the Lot and In the Air by Lisa L Hannett
A Woman’s Best Friend by Robert Reed
The Dying World by Lavie Tidhar
Advection by Genevieve Valentine

and direct from us at Wyrm Publishing

We’ve been offering subscriptions via the US and UK Kindle store for a while, but now we’re also available in Amazon’s German and French Kindle stores. These are English language editions. Not translations.

All our subscription options can be found here:

The British Science Fiction Association has announced their shortlist for the 2012 BSFA Awards. I’m very happy to report that “Immersion” by Aliette de Bodard (Clarkesworld Magazine, #69) is a nominee for Best Short Story. Nice news to start the day on.

Congratulations to all the nominees!

Slowly adjusting to my life as a cyborg, post surgery. I’m still having trouble sleeping at night and sluggish through a chunk of the day. Fortunately, I can and do take naps. I spend most of the time feeling like some bully has grabbed the skin on my chest (like a shirt) and is lifting me up against a locker. Tylenol is becoming a close friend. It doesn’t help that I’m squeamish and the bandage is off (I’m stitched and glued shut), so I can see what a mess I am. I half expect to fall apart. They warned me the bruising would be bad (thank you blood thinners) but…

Despite that, I’m in reasonably good spirits. The pain is oddly comforting… reminding me that a little machine is in there watching over me. Ready to jump in and save my life if the need should arise.

I’m also feeling a strange compulsion to ready some cyborg stories. Anyone have some recommendations?

Home from the Hospital: Defibrillator Edition

Exactly six months ago today, I had a severe heart attack that left me with annual one in fifteen odds of sudden cardiac death. There is no cure for the damage to my heart, but fortunately there are these wonderful little devices called defibrillators. Yesterday, I had one implanted one in my chest. If my heart acts up, this little device will save me. Everything went well and I’ll be recovering for the next 4-6 weeks.

If your curious, here are the details (very roughly written):

I arrived at the hospital at 8:30AM on Friday and got started on the paperwork. By 9:00, I was in a prep room where they shaved my chest, took blood and xrayed my chest, so they would have a before picture to compare to later. My doctor stopped by shortly before lunch (I wasn’t allowed to eat) and made me do a lap around the floor and a minute of crunches. This felt more like hazing, but he was trying to get a sense for how many leads they would need to run into my heart and needed to get my heart rate up. They settled on one.

Time for the big show arrived about an hour later. They wheeled me down the hall and slid me onto the operating table. While under, they cut me open and ran a wire through an artery and into my heart. The defibrillator was connected to the lead and placed in my left shoulder, under the skin. There is an obvious lump and scar. The device is heavier than you’d expect, but then it is mostly battery.

Next thing I knew I was in recovery and feeling pain in my left shoulder. A few shots of painkillers and I was feeling better, but also pretty sleepy. Every time I’d nod off, an alarm would go out, followed by a cry of “breathe deeply” from my nurse. This went on for over an hour. Another nurse came by and  gave us the rundown on my defibrillator:

A few hours later, they move me to my room and tell me:

The hospital beds automatically adjust themselves every 50 seconds. (To prevent blood clots.) I didn’t manage to sleep through this gentle nudging until about 3AM, which is when a nurse came in to check on me. They were back at 5:30 for pills, so I didn’t manage to get much rest. The doctor came in to chat about the operation. (Apparently, I saw him the day before but don’t remember it.) The procedure went well, but there was a lot of bleeding thanks to the drugs I’m on for my stents. There will be a nice big bruise around the incision for while and I’m to leave a big padded bandage on it until Monday. No showers until then.

Next up, the person from the defibrillator company. We chatted about the security on the wireless (if you’ve read articles about defibrillator hacking, you know why I asked about this) and I’m confident that it would be extremely difficult for someone to mess this up. She did, however trigger one of the modes so I would know how it felt. (It’s an odd heart racing thuddy feeling.) The second level of voltage is too dangerous to test, but I’m told it feels like getting kicked by a horse. Then she surprised me… if you hear this (sound starts coming from my shoulder) you are to call your doctor right away. I then asked if they had consider allowing people to add their own mp3s. (not yet, but I’m hoping the next one I get will have that 🙂 )

Most of the people on the floor were being released, so I had to wait a while to get my final paperwork. They fed  me a late breakfast (second meal in two days) and eventually caught up with me. Afterwards, I walked out of the hospital (a bit painful) and came home… where I am moving as little as possible.

Today is the day…

…that I become a cyborg. In a few minutes, I’ll be heading off to the hospital for the installation of my defibrillator. (I’m a techie, installation sounds better than surgery.) Can’t say that I’m not nervous, but I’ve been assured that this is a fairly routine procedure with a simple overnight stay in the hospital and a few weeks of recovery/restrictions. Back soon!