Return of the chapbooks

For years, I’ve consider the Clarkesworld chapbooks to be a cursed project. I think I’ve worked with a total of seven different printers over the years and only managed to complete three of them, one of which was subsequently lost by the USPS. Life became complicated (day job collapse) and I placed them on hold with all  the other Wyrm Publishing projects. Even after I began to catch up on those, the chapbooks stayed in limbo.

After the heart attack, I had a lot of idle time to think. I mentioned in last month’s editorial that I was going to refocus my efforts on making Clarkesworld “professional” in the sense of paying the staff a real wage. While subscriptions will make up the majority of our income, I can’t and won’t ignore the various secondary revenue streams the magazine has… advertising, annual anthologies, donations and, yes, the chapbooks. (more on the others later)

What you see above is a proof-of-concept chapbook of issue 64. My current goal is to have a least one at Capclave and several more in hand by World Fantasy Convention.

Clarkesworld is looking for a new slush reader

Clarkesworld Magazine is once again looking for a slush reader. If you are interested, please fill out this application.

There was a discussion on Twitter today about UK authors submitting stories to US markets. Since my data for Clarkesworld was referenced, I offered to dig a bit deeper into the stats for some more relevant data beyond overall percentages.

Here is a breakdown of all UK submissions (and authors) per month and by gender from 09/2008 through 08/2012. During this time period there were 1366 UK submissions from men and 569 from women representing 730 men and 262 women. We have seen submissions from 992 different authors from the UK. 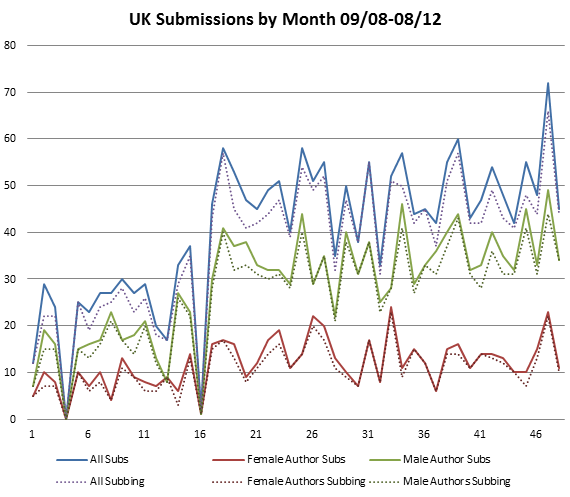 The dashed lines indicate the number of authors that turned in the submissions in the solid line. Most authors only submit one story per month.

The two low points on the above graph indicate periods that we were closed to submissions. The overall percentage of stories we receive from the UK fluctuates between 6 and 8% of our total submissions on the average. The overall percentage of UK authors submitting stories is roughly the same, until the last year, women had a slightly higher percentage than men when compared to all authors from other countries submitting to the magazine. Now they are nearly equal.

The September 2012 issue of Clarkesworld Magazine is now available. You can get the issue:

or help us pay the bills by purchasing Clarkesworld: PODCAST
This month’s stories will be released in audio form on the 1st, 14th and 21st. Read by Kate Baker.