Recruiting volunteers for our slush army! 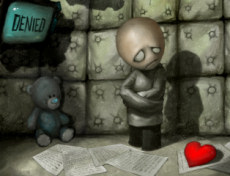 Think you have want it takes to read through piles of stories and separate the good from the not-as-good?

Can  you read a daily average of five stories and explain why you like or dislike them?

Are you willing to do this as an unpaid volunteer (OK, you’d get some occasional free Wyrm Publishing books.)?

Do you want to be a slush reader for Clarkesworld Magazine?

If you answered yes to all of the above questions, you should contact Neil Clarke (neil@clarkesworldmagazine.com) by September 3rd. Please include answers to the following:

1. Name
2. Preferred email address
3. Why you’d like to do this
4. The real reason you’d like to do this
5. A bit about your experience (done this before, are you a writer, how long have you been reading short fiction in this genre)
6. How long you’ve been reading Clarkesworld
7. Three favorite CW stories
8. Least favorite CW story and why
9. What magazines you read
10. Three favorite short fiction authors
11. Rank in order: Fantasy, Horror, Science Fiction

All applications will be kept confidential.

Toast in a box and a World Fantasy Nomination

It’s been a fun couple of days here…

1. Clarkesworld has another World Fantasy nomination!  Wow. Really. Quite an honor and very flattering.

2. A foot-thick tree limb feel from a tree and smashed the driver’s side window of our van. This is the second tree to fall on the van and the third time its been damaged by something crashing into in it in three years. The last one was someone rear-ending me on the way home from Capclave. Someone up there hates this van.

3. I received a pallet of books: 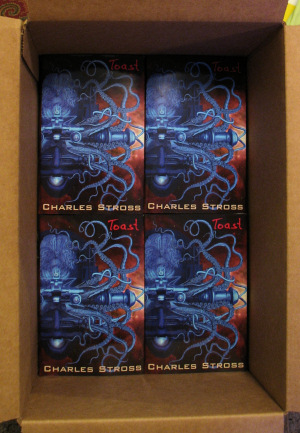 Yes, it is the signed limited edition of TOAST by Charles Stross. My hugely overdue and cursed (just like my van) project for Wyrm Publishing. (Art by Steve Montiglio. Design by Mary Robinette Kowal.) Over 700 nice shiny copies, which I’m busy numbering tonight. Orders will start shipping Saturday.

The mid-month Clarkesworld Magazine podcast features "Messenger" by Julia M Sidorova, an alternate view of the story of Christ. After posting yesterday about controversial stories, it occurred to me that this story might be another one that ruffles some feathers.

Anyhow, I hope you enjoy this one. If your having fun listening to our fiction, why not subscribe to the feed so you don’t miss any of them.

We can’t be a stranger to controversy

Last night, I received an email from a reader that included a quote and a link:

"Dr. Clarke is having apoplexy right now regarding that comp,tee piece of garbage published by a magazine that bears his name and ostensibly bears his legacy. " —Absolute Write forums (8/13/2010) on "Spar" by Kij Johnson from the October 2009 issue of Clarkesworld Magazine.

Clarkesworld Magazine has never made any claims to having a connection with Arthur C. Clarke. In fact, it bears the name of a bookstore I started over ten years ago (now closed) and that name came from the family domain I owned at the time. I know. Totally unimaginative. 🙂

Anyhow, "Spar" is a story we’re quite proud to have published. When we received this story from Kij, we knew it would trigger some passionate responses. The folks at Absolute Write haven’t said anything we haven’t before. In fact, it’s pretty tame. When "Spar" won the Nebula, one author said that Clarkesworld was killing the genre by publishing crap like this (despite that, he still submits stories to us) and a couple of people decided to make personal attacks (deleted, as per our policy) on Kij in the comments area for that story. Poke around the internet and you’ll find some very hateful comments about "Spar" that will cause these to pale in comparison.

On the flip side, "Spar":
– won the Nebula Award
– is a current Hugo nominee
– placed 2nd in the Locus Poll
– was a finalist for the Sturgeon Award (Kij withdrew it, she’s a judge)
– included in Strahan’s Year’s Best
– has received countless positive reviews and praise

If you want to kill the genre, you don’t do it by publishing controversial stories. In fact, you’ll know we’re all in trouble when no one is publishing them. Love or hate them, we need to celebrate these stories.

So, what are some of your favorite controversial stories?

August Issue of Clarkesworld Available for Kindle at Amazon

Looking for something fun to read on your Kindle? The August issue of Clarkesworld Magazine is now available from Amazon

…or you can buy the EPUB or MOBI/Kindle edition from the Wyrm ebookstore.

The August issue of Clarkesworld Magazine is now online. If you like what we do, please consider participating in our citizenship drive by making a a donation, purchasing a book or an ebook.