Cover Art for the March Issue of Clarkesworld

The current Adventures in Scifi Publishing podcast introduces a new feature: Magazine Spotlight. For some unknown reason, Shaun decided that he’d start off this feature with Clarkesworld Magazine and interviewed me for the piece. I’ve never done a recorded or live interview before and found the experience a bit unnerving. It’s so much easier to come up with answers after the microphone is turned off and your brain is once again fully functional. Fortunately, Shaun was able to edit out some of my tongue-tied brainless moments and make it a lot better.

This whole experience has reminded me of how things were about 15 years ago. I was working for a university at the time and had to give regular presentations about our laptop program during admissions events and conferences. Public speaking scared the hell out of me, but after a while, I learned some coping mechanisms and eventually became comfortable with it. Unfortunately, I’m realizing now that these were visual in nature and don’t cross-over.

I don’t know that I’ll ever do something like this again, but it seems to me that I should be better prepared in the event that I do. Anyone have any advice to offer?

I wonder what the neighbors will think

Lisa is attending the National Polymer Clay Guild Synergy Conference in Baltimore, so the boys and I are home alone. There was enough snow last night that none of us had to go to school or work today, so we decided to have a little fun. 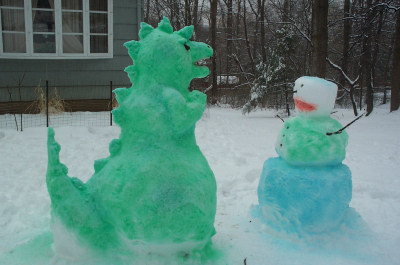 Aidan named the monster Zieful.  The snowman will just be Snowman #1.  We don’t expect him to survive.

What not to do when starting an online magazine. (Part 1?)

At the end of Simon Owen’s recent piece on finding a profitable model for genre ezines, he made a point of ending with the number of dead markets listed on Ralan.com. That number of 649 has since moved up to 650.

A bug started buzzing in my head. His article was specifically about online markets, but that number actually combines print and online markets.  A quick bit of research identified 269 print markets and 320 online markets. The remaining 61 didn’t contain enough information to tell.

Ok, 320 dead online markets. It’s a big number, but it in no way demonstrates that the online magazines have cornered the market on failure.  Still, I wanted to get a better understanding of what had gone wrong with these online markets, so I looked at pay rates. A stunning 157 (nearly half) of these markets paid $10 or less per story. That’s just wrong on so many levels.  What were they thinking? Let me spell this out more clearly:

IF YOU ARE GOING TO START ANY KIND OF MAGAZINE, PAY YOUR AUTHORS SOMETHING REASONABLE.

The SFWA defines pro-rate as 5 cents or more. It’s an arbitrary baseline and probably long overdue for a change, but it is still something officially recognized in the field.  A number of magazines pay in the 2-4 cent range.  Not great, but at least they are making an effort.

PAY PER WORD, NOT WITH HOLLOW PROMISES.

I was shocked by the number of markets that stated they wanted to pay on royalties from subscriptions, donations, or shares of the advertising. Let’s be fair here. Tell them exactly how much they’ll be paid (in US dollars, not Monopoly money) before you print the story. If you can’t, think twice before you start your magazine.

Yes, I am aware of a few good zines that fly in the face of what I’m suggesting, but believe me, they are the exception, not the norm. You need to ask yourself, why anyone would sell me a story for that rate when there are other markets that pay better. If you can answer that question with an honest positive for the author, I’d love to hear it.

I know… Learning from the mistakes of others is simply crazy talk. But maybe I’ll do it anyway.

The rise of the genre ezine: Will it ever find a profitable model?

That’s the title of a recent post over at Bloggasm.  Simon interviewed several editors and publishers of ezines, including everyone at Clarkesworld Magazine, and makes some good observations. I’m not sure if he plans to continue writing about this topic, but I’m hoping that someone does.