Here’s what we have for you this month:

This coming weekend I’ll be at  World Fantasy Convention in Saratoga Springs, NY.  A few copies of Wyrm Publishing’s first book, Realms: The First Year of Clarkesworld Magazine, will be available in the dealer’s room at the Prime Books table. (I was unable to get a table. Maybe next year.)

I’ll have room in the van to bring some books and magazines up with me, so if anyone who’ll be there wants to make me an offer on some books listed on the website, we can definitely talk. (email: books (at) clarkesworld.com) I’m motivated and this is a nice easy way for me to get more books out of the house.

Anyhow, I’ll be the guy in the Wyrm Publishing t-shirts, so please stop me and say hi if you see me there. 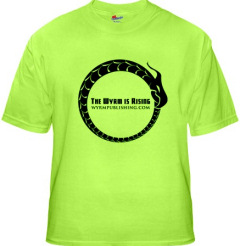 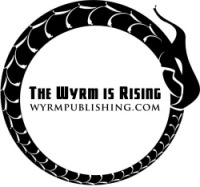 Ministry of Whimsy to become imprint of Wyrm Publishing

Effective January 1, 2008, Jeff VanderMeer’s Ministry of Whimsy Press will come out of hibernation as an imprint of Wyrm Publishing. VanderMeer will work as a creative consultant and publicist for the Ministry’s books.

Future projects for the Ministry will include Last Drink Bird Head, an anthology of flash fiction in support of literacy projects that features contributions from Gene Wolfe, Peter Straub, Tanith Lee, Stephen R. Donaldson, Rikki Ducornet, Caitlin Kiernan, Michael Swanwick, and many more. Through Wyrm Publishing, the Ministry will release two to three books a year, with the Leviathan series set to return in 2009. The Ministry is not currently soliciting book projects.

Wyrm Publishing was established by Neil Clarke earlier this year, and will soon publish books by Charles Stross, Gene Wolfe, and Tobias Buckell, in addition to the ongoing publication of Clarkesworld Magazine and its annual Realms anthology. For more information on Wyrm Publishing, visit their web site.

Look what I found at Capclave

No time to write about all that was Capclave right now, but this was waiting for me when I got there: A nice shiny ARC of Realms.   Just confirmed that we’ll have some of the trade paperbacks in time for World Fantasy.  The rest will follow a few weeks later.

In July, I surveyed readers of this blog to find out what people were looking for in an online magazine. At that point, I was secretly considering moving Clarkesworld to a weekly format that spread an issue out over a few weeks. I changed my mind when only 15% of those surveyed wanted something more frequent than monthly. (Monthly took nearly 30% of the votes.) Two other categories in this poll probably skewed those numbers: “Doesn’t matter, I’ll read on my own schedule” and “Give me RSS and I’ll read as posted”.

End result: Clarkesworld will stay a monthly publication and now has an RSS feed.

The next question was about content. No big surprise that the overwhelming majority of people wanted new fiction. Interviews and reviews ran neck in neck with nearly 2/3rds of the responders expressing interest in these. Commentary came in next with 42% of the vote. All the other categories interested less than one third.

End result: Clarkesworld is expanding beyond its two pieces of fiction. The first part of that expansion is online now. We’ve added interviews and commentary. This month:

All non-fiction columns will allow for reader response in a typical blog-like fashion. I’m still tweaking this, so feedback is welcome. I haven’t decided whether or not to do this with the fiction. Opinions?

I’ve also made a few cosmetic changes to the site.  Now that we have a year’s worth of content on the site, the navigation needed to be tweaked a bit. I’ve also added a cover art gallery since people seem to really get a kick out of the pieces we’ve selected.

And that’s just the beginning…