Over the last few months we’ve experienced an increasing number of issues with the company that has been handling our Android and Apple subscription apps for Clarkesworld Magazine. Among them is the fact that they haven’t paid us since August.

Because of this, we’ve been left with no choice but to cancel our relationship with them. At this time, we have been unable to secure a list of active subscribers from them, so we are sending out an alert via the app that will direct people to this post.

We are presently investigating other options for providing subscriptions on those platforms and hope to restore that option with a new vendor. If you were an app-based subscriber, please consider one of these options as an interim or permanent replacement:

BARNES & NOBLE
Monthly and annual digital subscriptions are available for the Nook and Nook app. New issues will be delivered automatically to the Nook.
BUY HERE – barnesandnoble.com

CLARKESWORLD CITIZENS
Among the many options to support us directly at Clarkesworld Citizens are digital (EPUB, MOBI/KINDLE, and PDF) and print subscriptions. Monthly subscriptions start with the current month’s issue. Files must be downloaded to your device.
Join at clarkesworldcitizens.com.

PATREON
Among the many options to support us at Patreon are digital (EPUB, MOBI/KINDLE, and PDF) and print subscriptions. Monthly subscriptions start with the current month’s issue. Files must be downloaded to your device.
Join at Patreon.

If there are other subscription services that you are aware of, please feel free to leave a comment on this post and we’ll see whether or not we can add them to our list of distributors.

I just booked my flight and hotel room for Chicon 8, so I’m one step closer to attending Worldcon this year. Despite that, I still have a reluctance to say that I’ll absolutely definitely be there even though it looks like I will.

Ten years ago, I was supposed to attend Chicon 7. I had just received my first Hugo nomination for Editor Short Form and I was excited to have the opportunity to celebrate with my fellow finalists. Everything was set. I had my flights, hotel, and membership. A month and a half before the convention, however, I had a heart attack and nearly died. I tried to maintain some hope that I could attend, but it wasn’t destined to happen. Trip canceled.

Here it is ten years later… I’m celebrating my tenth time on the ballot and it appears as though I’m set to visit the same city to mark the anniversary. To say I’m looking forward to it is an understatement.

That heart attack changed a lot of things for me and reshaped the direction of my career as an editor. It also left me with a significant amount of heart damage, which puts me at high risk with regards to COVID. All the other conventions on my list for 2022 are in driving distance, which eliminates the need for airports and reduces my risk of exposure to a more reasonable level. Toss in the recent end of mask requirements on planes and an expectation that cases will tick upwards towards the end of Summer, and you find the source of my uncertainty. I want to be wrong, but have to acknowledge that the ghost of my heart attack could strike again and keep me home.

For the tenth time

The Hugo Award finalists were announced this week and I’m honored to once again be a finalist for Editor Short Form. This is my tenth time in the category. Currently 0-9. Maybe the tenth time is the charm. I’d like to thank everyone who nominated and congratulate my fellow finalists.

I’d also like to give a shout out to Novelette finalist Suzanne Palmer. So happy to see “Bots of the Lost Arc” in the running. This is a sequel story to “The Secret Life of Bots” which won the 2018 Hugo Award for Best Novelette.

Clarkesworld Reader’s Poll – Round One

The nomination phase for our 2021 Reader’s Poll kicks off today! Celebrate your favorite 2021 Clarkesworld cover art and stories by giving them a nod. The top five go onto the final round in February. Ends 1/26/22 11AM EST.

“But I haven’t read all the stories!”
No no no… don’t worry about that. This is about showing some love for the stories you read and enjoyed. You don’t need to read everything to do that. And at worst, you can just look at the twelve covers and say which of those spoke to you the most. Takes all of a couple minutes, tops! Number of Submissions by Author at Clarkesworld in 2021

Today’s dive into the 2021 submission data for Clarkesworld Magazine looks at the volume of submissions from each author in 2021. Returning authors are authors that had submitted at least one story in 2020 or earlier. 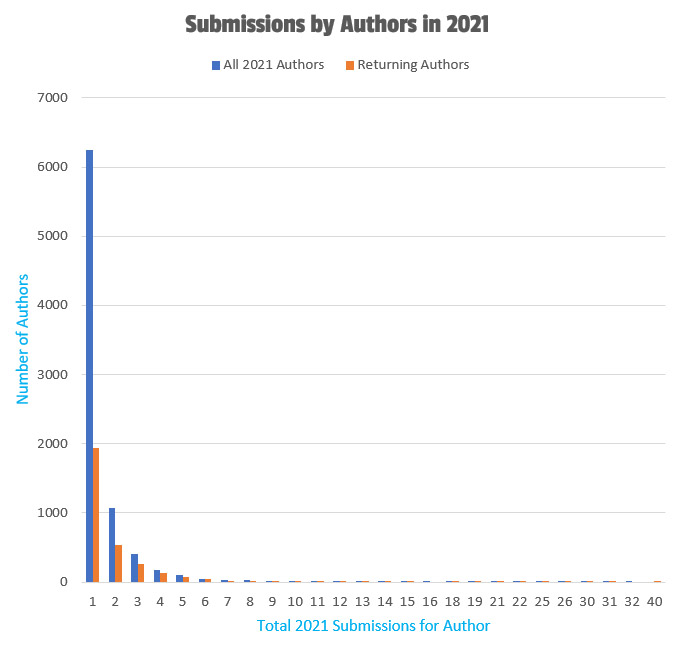 The pool of regularly submitting authors is probably smaller than most people expected. An overwhelming majority of authors only submitted a single story in 2021 and nearly 70% of those people were submitting a story to us for the first time. Just under 2000 authors submitted more than one work in all of 2021 and of those half only submitted two. The ratio between US and non-US submissions remains consistent throughout the data. No one submitted more than 40 stories last year (which is the most anyone has done in the last three years). If a number is missing, no one submitted that number of times.

Returning authors represented 38% of all authors and 48% of all submissions. This is in line with previous years. (A surge in first time authors in 2020 led to the returning rate to fall to 36%. That’s the only time it’s gone that low, though actual number of returning authors was consistent.)

Why does this happen? I don’t have that data, but I can make some educated guesses. I know a lot of writers just drop out of the field. Imposter syndrome plus rejection can be a powerful one-two punch. Some discover that it isn’t their passion or that doing it for money ruins it for them. There’s also the possibility that our short rejection times are intimidating to some. And then there’s the occasional spikes in submissions we receive when we’re (unfortunately) featured on a “write for money” website. I imagine that most of those don’t stick around when they realize it isn’t as easy as stringing some words together (or in some cases, cut & pasting). There’s also socio-economic factors that play in for some. Just not enough time to devote to something that won’t help pay the bills.

On a much lesser scale, you have the impact of solicitation of more established authors, loss of writing time when novels enter the picture, and the common desire to be published more broadly (an author may start submitting work to other markets instead of yours in pursuit of that goal). I can’t stress just how small a percentage of the entire pool this is. It’s only impactful if “name” authors are your priority and we choose to treat them like everyone else. We value new authors just as highly. Both are an important part of the short fiction ecosystem.

Anyhow, what we’re seeing is probably some combination of the above and more. (Like the people who complain about not getting feedback.)

Some positives you won’t find in the graph (since it’s focused on submissions, not acceptances):

and one piece of data I’d like to highlight:

All the data I’ve been digging through (combined with 15 years of the submissions themselves) has had me thinking about the role of persistence, imposter syndrome, and self-rejection in submissions. Over the years, I’ve started coming around to thinking that in addition to skill, both persistence and (some reasonable level) of imposter syndrome are necessary to get a career off the ground. Imposter syndrome is to be fought when it’s the impetus behind self-rejection, but if we’re listening, it’s also the voice that reminds us we have more to learn. Persistence comes into play making us act on it. Learn more, improve your craft, and keep submitting work. Persistence only becomes troublesome when it veers into stubborness. That’s where you starting making the same mistakes over and over and expect a different result. (This is very common among the angry writers I hear from periodically. There’s typically a lack growth happening in their work from submission to submission.) The only good self-rejection is when it stops you from doing this. (Side note: An observable trajectory of improvement is a unifying thread behind every author we’ve worked with. I can see it in the submissions.)

As much as it would probably swamp us with more submissions, I’d love to see a little more of the right kind of persistence in this data, even if it only means one story every year or two. You decide what pace is healthy or practical. Just keep submitting them here, there, or wherever.